The point is that philosophy is often linked with certain people–philosophers of their time who came up with concepts, or had extensive discussions and writings on specific topics. It is more so a secondary view that philosophy can develop from stories instead of people. However, this is most certainly the case.

The media and entertainment industry has been around for basically as long as humankind. Whether that be plays, books, music, television, or film, humans enjoy taking in content. In fact, entertainment is a vehicle for conveying a lesson or moral.

How Children’s Books Start a Conversation about Philosophy

Children’s books are especially effective at starting conversations about philosophical topics. Some people may argue that philosophy is too advanced for young children.

Although philosophy at all levels may be complex– because of the issues it discusses– this does not mean it is off-limits for younger children. Children’s books, for example, take the content of different philosophical discussions and convert them into digestible stories that kids can understand and talk about, too.

Let’s take a deeper look into how children’s books start a conversation about philosophy. 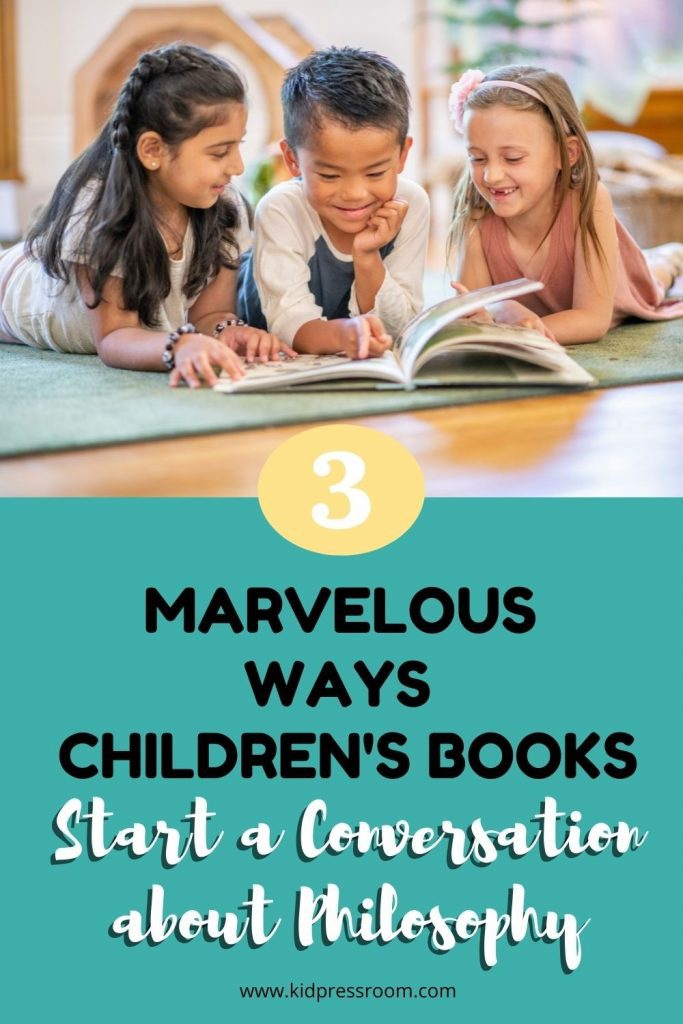 You may also like: 5 Poignant Children’s Programs that Discuss Real-World Issues

At their most basic level, children are able to relate to children’s books because they present everyday scenarios, relationships, and problems. Children’s books cover a wide array of issues, ranging everywhere from bullying, to new siblings, to discipline, and more!

For instance, the Curious George series follows the life of a curious monkey named George and his guardian, the man in the yellow hat. As his name suggests, George is curious about everything and often gets into trouble. He finds himself in many situations that normal children could easily find themselves in, like learning how to ride a bike, or getting hurt and going to the hospital.

The Olivia series similarly depicts the everyday life of a child. Olivia is a high energy little pig who loves to sing, dance, play, and adventure. She often gets into mischief and has to dig herself out of it. She also has a wild imagination, which is a great thing for a child to have!

This is an excellent question!

Cloudy with a Chance of Meatballs is about the fictional town of Chewandswallow, where food falls from the sky at each mealtime. Suddenly, the weather takes a bad turn, and the people of Chewandswallow face catastrophic events like spaghetti flooding, a whole day of cheese rain, and pea soup fog.

These two stories are indeed fantasy, however, the root of their stories lies in real-life scenarios. For instance, in Where the Wild Things Are, the common situation is being disciplined. Max does something wrong, and his mom sends him to his room. This prompts the magical escape world, which Max creates to deal with being disciplined, and the boredom of being in his room.

In contrast, the world in Cloudy With a Chance of Meatballs is already fantastical. The real-life scenarios come with the weather, which wreaks havoc on Chewandswallow. Although the weather in this book is food-related, anyone can relate to bad weather like rain, storms, tornados, floods, and more.

These real-life scenarios provide a start to philosophical conversations. Children begin to wonder about how they may feel in similar situations, and how they may react.

They Teach a Lesson

Children’s book authors use the everyday scenarios of their characters to create meaning and teach a lesson.

Stories in general usually follow a certain guide. First, there’s the beginning, the middle, and then the end, which normally has a resolution. Children’s stories are no exception, and in fact, often embrace this storytelling structure in order to present a simple and linear tale that is easily understood by children.

This storytelling structure can help kids begin to think about philosophy because it shows that if one thing happens, then something else will follow.

An example of this rationale is present in the book If You Give a Mouse a Cookie. In the story, when the mouse is given a cookie, he then asks for a glass of milk, and the list of things he asks for goes on from there.

In the end, the story comes together to teach some sort of lesson. The simple storytelling structure (beginning, middle, end) that the authors use makes the lesson a culminating point. In other words, the teaching comes after most of the action in the story.

A good example of this method is the book The Rainbow Fish. The rainbow fish is beautiful, but he is lonely. Then, he begins giving away his beautiful shiny scales to other fish. This makes him happy, teaching a lesson that sharing with others is fulfilling and rewarding.

This lesson cannot be learned without the story that comes before it. Thus, the structure of the story, the one that culminates in a lesson, helps to foster a child’s philosophical thinking. It shows the order of events that lead up to and may be the catalyst for a moral thought or statement.

After presenting real life situations, problems, and solutions, children’s books are excellent tools for prompting questions. Many of these questions are philosophical in nature.

Asking questions about the nature of humankind and the universe is the foundation of philosophy. Children’s books make us ponder many topics, like ethics, conflict, relationships, identity, social situations, and more.

Questions get kids thinking about the message of the story. They also help relate the content of the book to the real world. This is the perfect starting point for any philosophical discussion, as it contextualizes the story at hand while also helping kids visualize the lesson or moral.

“Do you think the boy is selfish? Why or why not?”

“Is there a word for someone who keeps on giving without thinking about themselves or expecting something in return?”

“Why do you think the tree is not happy after giving the boy her trunk?”

These questions prompt children to think about not just the story itself, but what the story teaches us.

What are the themes present? What lessons do we learn from this tale?

These are the types of questions that get kids thinking philosophically.

Conclusion on Ways Children’s Books Start a Conversation about Philosophy

Children’s books hold a special place in a child’s life by encouraging them to think about the nature of people and how the world works. They present everyday situations which teach lessons and prompt kids to think about how those lessons apply to their own lives. These lessons also make children think more deeply about the context and consequences of these messages.

Practicing philosophical questioning enforces critical thinking skills that children need to learn. Not only do children’s books start a discussion about philosophy through their lessons, but they also encourage children to flex their practice of inquiry, which helps down the road with similar philosophical topics.

Is there a book you read as a child that made you think about the world more deeply? What other ways do children’s books start a conversation about philosophy? Let us know in the comments!

*Questions for Philosophical Discussion by Thomas Wartenberg. Revised by Jayme Johnson. Edited June 2020 by The Janet Prindle Institute for Ethics.