What Are Your Favorite Children’s Programs that Discuss Real-World Issues?

Is there a television program that you watched as a child that you learned a lesson from? Education is the basis for many kids’ TV shows, and some programs do a truly excellent job of teaching kids relevant topics.

Learning about real-world issues, like conflict, emotions, or tragic events is especially important for young children. Unfortunately, not every children’s program portrays these topics in a constructive way.

Luckily, in the age we live in, we have a plethora of poignant children’s programs that discuss real-world issues in a thoughtful and educational way. We’ve compiled a list of our five favorites: 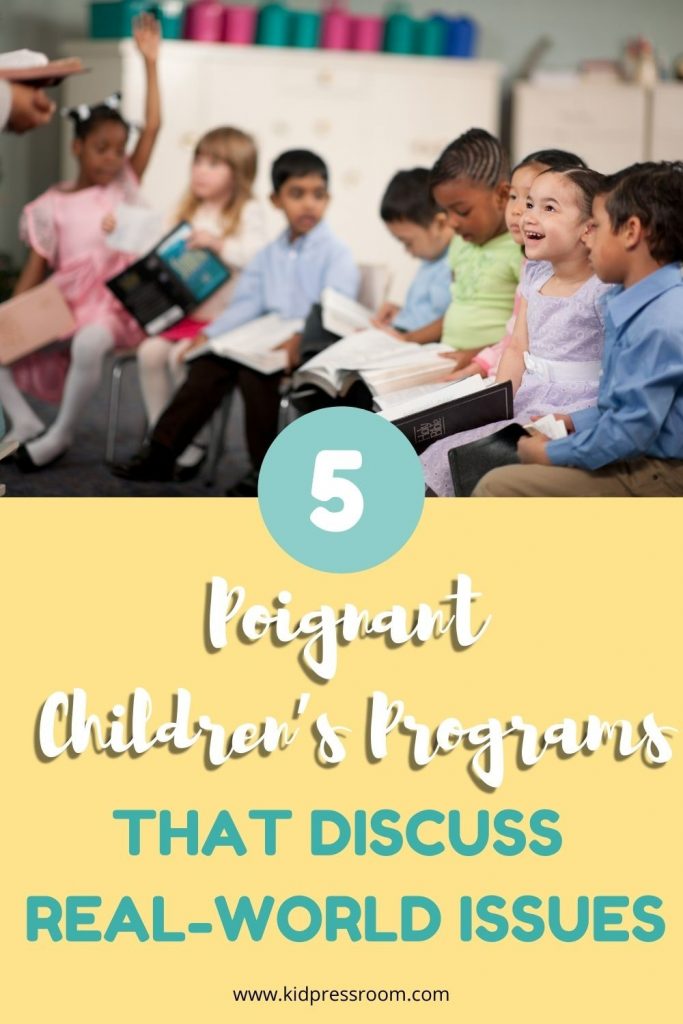 You may also like: Pixar’s Turning Red: A Love Letter to Youth and the Flaws of Adolescence

Everybody loves Mister Rogers’ Neighborhood, and for good reason!

The television program began in 1968 and ran until 2001. Every episode, the host Fred Rogers came home and put on a sweater and sneakers. A trolley would come through, transitioning the episode into the fantastical Neighborhood of Make-Believe.

The show then transitioned back to the “real world” after these segments, helping children know the difference between fantasy and real life.

Mister Rogers talked to the audience about everything, ranging from normal everyday events to national tragedies and social issues. The show never shied away from these themes, unlike other children’s television– which often avoided discussing real-world issues and instead focused on fantastical worlds.

Mister Rogers’ Neighborhood had so many notable episodes. Some of our favorites include “Divorce,” an episode that aired in 1981, and as the name says, covered the topic of divorce. In it, Mister Rogers explained effortlessly why couples get divorced and how it wasn’t their child’s fault.

Another great episode was one that aired in 1969. Mister Rogers was soaking his feet in a wading pool, and he invited a black police officer, Officer Clemmons, to join him. This was a big deal at the time, as swimming pools were still often segregated by race.

The notion that Mister Rogers and Officer Clemmons shared a pool (and a towel, too) sent a strong anti-segregation message. It showed children that all people were worthy of kindness and friendship.

Mister Rogers always made his messages clear and poignant for his viewers. Not only did he discuss real-world issues, but he did it in an accessible and entertaining way.

Sesame Street is another legendary children’s program like Mister Rogers’ Neighborhood. The show began in 1969 and is still on the air! It does an amazing job at teaching children real-world issues.

Set in a neighborhood in New York City, Sesame Street has many different characters who engage in normal everyday jobs and activities, whether they be puppets or humans.

Because of the sheer number of episodes, Sesame Street has successfully covered a very wide range of social issues and current events. They even have a website titled “Sesame Street in Communities,” which has a guide on different topics with lessons for children about them.

The program has also discussed death and grief multiple times. For example, when a recurring character in the show, Mr. Hooper, died in real life, writers chose to talk about his death.

Based on the Arthur Adventure book series, Arthur is a show about an anthropomorphic aardvark named Arthur, his family, and his friends. And it’s an excellent representation of animals in children’s literature.

The show began in 1996 and is still on the air (though as of writing this, they are on their last season). It has tons of characters, and each character at some point deals with some sort of real-world issue (or many) throughout the series.

It has also covered health issues and disabilities quite a bit. For example, in season 6, George found out he had dyslexia and didn’t want anyone to know for fear of embarrassment. He soon learned that he could get extra help. He also learned that there was more to learning than just reading and writing, which was what he struggled with the most.

In season 7, there was an episode about Prunella and Marina, the latter of whom is blind. Prunella was worried about her friend staying over at her house. However, Marina showed her the ways she has adapted to the world around her.

Another great episode from season 7 was about Jenna, who dealt with bedwetting. She worried about her friends finding out about her issue at a sleepover she was invited to. Jenna was especially afraid her friends would make fun of her when they saw the diaper she brought, just in case she needed it. She also had to wear a special alarm to bed.

In the end, no one thought it was a big deal, though. And this helped Jenna feel better about the situation.

Arthur also made history when it depicted a same-sex wedding. In the first episode of the 22nd season, Mr. Ratburn, the school principal, married a chocolatier named Patrick.

This series tackled issues head-on and discussed real-world issues in a realistic and poignant manner, getting plenty of attention from kids. This is why it is on our list.

Daniel Tiger’s Neighborhood follows the life of Daniel Tiger, the son of the original Daniel Striped Tiger from Mister Rogers’ Neighborhood. It began in 2012 and is still on the air.

This program is loosely based on Mister Rogers’ Neighborhood, however, the format is different. For one, it is a cartoon, and everything takes place in Daniel Tiger’s world– which is based on the Neighborhood of Make-Believe.

The neighborhood consists of many diverse families, both human and animal.

Each episode discusses a theme, like an emotion or problem-solving. These issues are discussed through songs, which the creators call “strategy songs.” The reason being is that these songs teach kids strategies for dealing with real-world issues.

Some examples of “strategy songs” include: using your words and saying how you feel, cleaning up, apologizing, dealing with anger, empathy, new siblings, and more!

Daniel Tiger’s Neighborhood effectively uses songs to engage children in real-world scenarios. The program educates them about dealing with issues they may face in a thoughtful and constructive manner.

The show also provides good representation for those with disabilities. For example, there is a character named Chrissie who uses leg braces and crutches to walk. Another character, Max, has autism and is actually voiced by someone with autism.

Liberty’s Kids is a historical fiction cartoon that aired from 2002 to 2003. It depicted the American Revolution through the lives of the main characters Sarah Phillips, James Hiller, Henri Richard Maurice Dutoit LeFevbre, and Moses. They all found themselves working for Benjamin Franklin’s newspaper in 1773, and the show spaned all the way to 1789.

No, Liberty’s Kids did not discuss contemporary events. However, the themes it covered were most certainly applicable to today’s world– and the real-world issues many people face.

For instance, Liberty’s Kids depicted slavery. Moses was a former slave. He was not simply “saved” from slavery by a white person, instead, he bought his own freedom from his master. Although this was not a realistic option for many slaves, it did send the message that Moses was in charge of his own destiny and had autonomy.

Another character, MumBet, who was also a slave, sued her master for freedom. In the episode, “Born Free and Equal,” Sarah was at the trial, and she expressed worry over the case because the jury was all white men. Even so, they still decided to free MumBet and her daughter.

Liberty’s Kids didn’t make out white historical figures to be all good, either. They accurately depicted that Thomas Jefferson owned slaves.

Additionally, the show, of course, dealt with death and war, as it revolved around the American Revolution. The main characters lost many people in their lives, saw their loved ones go to war (like Moses’ brother, Cato), and even witnessed executions– like that of spy Nathan Hale. The show also touched on the terrible effects the war and colonization had on the Native American community.

Liberty’s Kids teaches children about a multitude of issues like racism, religious tolerance, cultural differences, standing up for what you believe, loyalty, and more. All of which are still applicable to the current day and age despite it being a historical show.

It is a poignant children’s program that discusses real-world issues, even if they are historical in nature.

Children’s TV programs have immense power and can be a great educational tool for children.

Through different techniques, like the use of songs, short segments, and fun characters, these programs keep kids’ attention and, thus, teach valuable lessons to children.

What’s your favorite TV program from childhood? What lesson(s) did it teach you? Share your thoughts with us in the comments!