It can be hard for children to understand death. Much of the time, kids don’t understand that when someone dies, they are gone forever and that they aren’t coming back.

So, how can we help kids cope?

There are many ways we can help children understand and deal with death. We can talk to them and explain what it means to die. More than this, though, is that we can explain the importance of memory.

Yes, people die, but we can remember them. We can establish traditions, look at pictures, and do things that keep the person who has died alive in our minds and hearts.

Luckily, there are many movies out there that beautifully depict death and keeping memories alive.

Here’s a list of five Disney animated movies that depict death and memory in a thoughtful manner. 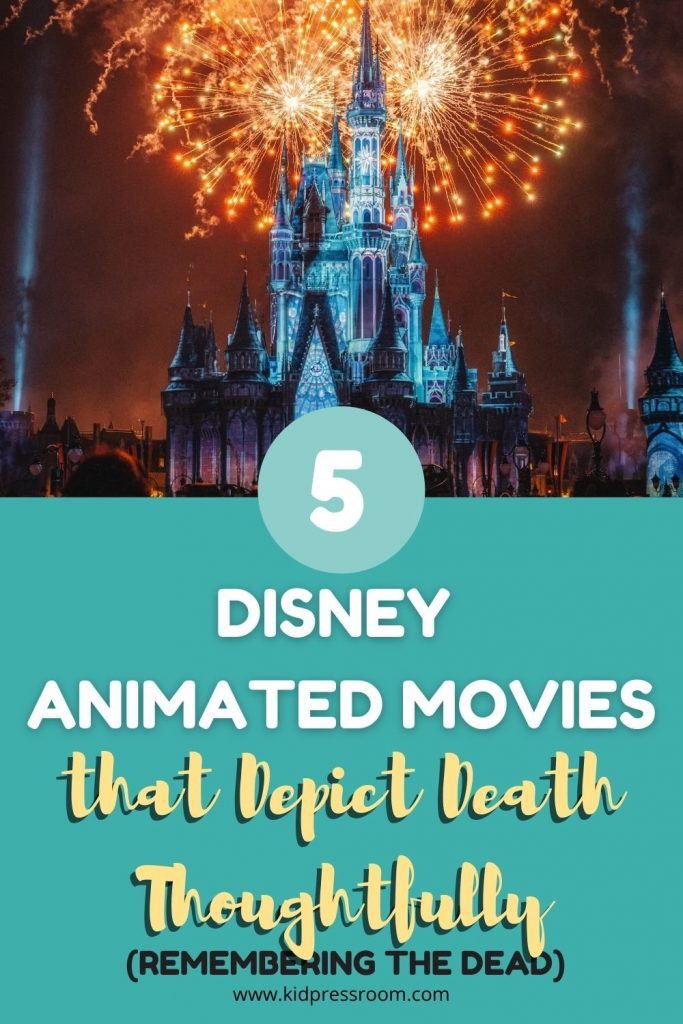 You may also like: Valuable Lessons from 10 Beloved Children’s Books (We Can All Learn from)

The Lion King teaches an important lesson about guilt and shame when it has to do with death.

Simba, the main character, is going to inherit the throne from his father, Mufasa. Scar, Mufasa’a brother, is jealous of this, and plots for the death of Simba and Mufasa.

When Mufasa is hanging onto a cliff about to fall, Scar pushes him off to his death. Simba witnesses all of it, and Scar tells him it is his fault, urging him to run away.

Witnessing his father’s death hurts Simba. For the rest of his childhood, he is raised by Tomon and Pumbaa, and later reunites with his childhood friend Nala, who he falls in love with.

She wants him to come home and help the kingdom, which is doing terribly under the reign of Scar. But Simba cannot bring himself to do this situation because he still feels guilty about Mufasa’s death.

Simba’s struggles show children that sometimes when someone we love dies, we may feel guilty about it. This guilt can overlap with shame about what happened, and this can cause avoidance. When people grieve, it can be hard for them to face the world and the people they love because they are weighed down by these emotions.

But, Simba learns that his father is always with him in spirit. In fact, Mufasa visits Simba in spirit form and tells him he must return home. This encourages Simba to come back and take his rightful place as king.

The lessons that Simba learns are valuable for children to hear. If someone you love dies, it is not your fault. Most of the time, people die of other circumstances, or there are other adults who wish to harm them. Even if you believe you have contributed to someone’s death, as a child you bear no responsibility on the matter.

Also, the memory of the person you have lost can help guide you, and encourage you to overcome your guilt and shame. The way The Lion King discusses guilt and shame is why it is on our list of favorites Disney animated movies that depict death thoughtfully.

Teenage genius, Hiro Hamada, spends most of his time gambling in robot fights. His older brother, Tadashi encourages him to get involved at his school, the San Fransokyo Institute of Technology, and meet his friends, his professors, and Baymax, who is a big inflatable robot of Tadashi’s creation.

Hiro is accepted into the school but is soon rattled by his brother’s death in a fire explosion of a building on campus. He dies trying to save his professor, Callaghan, who is inside.

Suspecting foul play, Hiro gives Baymax fighting tools, and they go after a man in a Kabuki mask. The man in the mask turns out to be Callaghan, who has faked his death and purposely had Tadashi killed. Hiro tries to get Baymax to kill Callaghan, but Tadashi’s friends stop him.

Tadashi’s friends and Hiro find evidence of Callaghan’s crime, and he is arrested for what he has done.

The San Fransokyo Institute of Technology dedicates a building in Tadashi’s memory, and Hiro, Baymax, and his friends continue to fight crime and do good in their city, in Tadashi’s honor.

Big Hero 6 shows children that we can use the memory of those who have passed to motivate us to do good in the world. In doing so we honor the departed.

Even though people die, it doesn’t mean we stop thinking about them in the things we do. In fact, death can encourage us to embrace someone’s memory. Tadashi is someone who is caring and does things to better the world. This is something that children can emulate.

Moana is a boisterous young woman who sets out to help her island, Te Fiti. When the crops face a blight, and they can no longer catch fish, Moana insists that she go beyond the reef. Her family has banned this type of adventure after a shipwreck happened years ago, killing members of the community.

Moana decides to do it anyway. Her grandmother shows her a hidden set of ships the community has decommissioned after the incident. After this revelation, she falls ill, and on her deathbed insists that Moana go on her voyage and restore the heart of Te Fiti.

Moana meets Maui, who helps her along the way, but she does get discouraged on the long journey. Again, she is visited by her grandmother who swims up to her boat as the stingray. Then, she morphs into human form and visits her as a ghost, comforting Moana and encouraging her to keep going.

The memory of her grandmother motivates Moana to finish her voyage and restore the heart of Te Fiti.

This is a great lesson for children: although people die, they will always be with you in your heart. Symbols may also help you remember them, like the stingray.

From Moana, kids can learn to use the memories of those passed to help others, as Moana uses the memory of her grandmother to push forward and restore the heart.

Using the memory of those who have died to encourage us to do good is the lesson we take from Moana and Big Hero 6, and that is why they are also on our list of Disney animated movies that depict death thoughtfully.

In some ways, Coco revolves wholly around death. The film is inspired by the Mexican holiday Día de los Muertos, or Day of the Dead. On this holiday, families create altars (called “ofrendas”) for their deceased loved ones.

The ofrendas hold pictures and items that the dead enjoyed in life or that had some meaning, such as food they liked, clothing, perfume, and more.

Miguel loves music, especially musician Ernesto de la Cruz, but his family forbids it because his great-great grandfather was a musician who left his wife and child for fame.

On Day of the Dead, the dead can visit the living on one condition: their picture must be on the ofrenda.

Miguel looks at the ofrenda picture of his great-great grandmother Imelda and her daughter Coco, realizing that there’s a man in the picture holding what looks to be Ernesto de la Cruz’s guitar. Because of this image, Miguel believes he is his long-lost great-great grandfather.

Miguel ventures into the Land of the Dead to find Ernesto. There, he talks to his deceased family members who are upset with him. Because he has taken the picture of Imelda and Coco off of the ofrenda, Imelda cannot visit her living family members like the rest of them.

Miguel gets a picture of Hector from Ernesto, and later returns to the Land of the Living where he talks to Coco. She remembers her father and sings along to one of his songs. Imelda and Hector reconcile and music is unbanned from the family.

Coco makes tangible a concept that we often vocalize about the dead: if we don’t memorialize them, we forget them.

In the film, a deceased person totally disappears from the Land of the Dead if their picture isn’t on the ofrenda. This teaches children that we must remember the dead, or else we risk losing their legacy.

Coco also makes death less scary for children. It shows a vibrant afterlife and emphasizes that the dead can still have some sort of relationship with the living.

Up is about many things, but it especially depicts getting older, losing the ones you love, and how the grief from those events affects you.

Carl and Ellie, curious adventurers and idolizers of explorer Charles Muntz, meet as children. They become close and marry as adults. They try to save up to go to Paradise Falls in South America, but they keep having to use their savings for other expenses.

The pair grow old, and Carl buys tickets to fly to Paradise Falls, but before they can go Ellie gets sick and dies.

After her death, Carl becomes a grumpy curmudgeon. When he is forced to live in an assisted-living facility, he instead puts a bunch of balloons on his house so that he can fly somewhere else.

To his chagrin, eight-year-old Russell accidentally gets caught up in the house before it flies away. A storm brings the pair to South America. They land at Paradise Falls and meet a giant bird, Kevin.

There, they also meet Charles Muntz, who has been searching for the bird. Carl realizes that Muntz is not as great as he seems: the hunt for the bird has made him insane and cruel.

Eventually, Muntz captures Kevin. Russell insists that they save Kevin, who is actually a female bird with chicks.

Carl looks at the scrapbook he and his wife kept together and realizes that when she was in the hospital, she wrote him a message. She thanks him for the adventures they had in life, but wants him to keep having those adventures even after she’s gone.

Inspired, Carl and Russell reunite Kevin with her chicks and finish up their adventure, returning home. The pair have formed a true friendship.

This film teaches children about how we feel when someone dies. Usually, we feel really sad, and we don’t want to interact with the world. We feel like there’s an empty hole, something missing, and we find it hard to go on with our daily lives without the person we love.

But, we have to remember what that person wanted for us and try to emulate that in our lives. A lot of the time, this makes us happy and fulfills us.

Up teaches us that life doesn’t stop after death, and that we can still have adventure and fun even after someone we love dies.

This is something very important for children to learn. Losing someone when you are young can be hard as you have to figure out how to go on for the rest of your life without that person.

Thus, the valuable lesson that Up teaches us is why it is on our list of Disney movies that depict death thoughtfully.

Death can be hard for children to deal with. Losing someone is hard for anyone, but for kids, it is especially challenging because they often cannot fully comprehend the event.

These Disney movies that depict death thoughtfully can help children understand what it means when someone dies, how we can remember them, and what we do after their death.

Do you enjoy any of these movies? Besides these examples, what other favorite animated movies that depict death would you recommend to us? Let us know your favorite in the comments!