Mighty Disney’s ‘Encanto’ Lessons for Children One Needs to Read

Disney is well-known for its take on familial trauma through a colorful and entertaining lens.

From Frozen’s take on sisterly bonds to Big Hero Six’s themes of death and grief, Disney faces these issues head-on behind stunning visuals and star-studded casting.

Their new film Encanto has been an immense success with audiences. From the music to the message, the world has immersed itself in the world of Encanto.

However, it does more than spoon-feed its young audience the importance of family.

Behind the success is a heartbreaking story about trauma and family dynamics. Though Disney’s Encanto teaches many lessons on these themes, a few ones are prominent within the movie’s overall messaging.

But understanding these messages requires a quick lesson on generational trauma. Just know that this article contains spoilers for Disney’s Encanto. 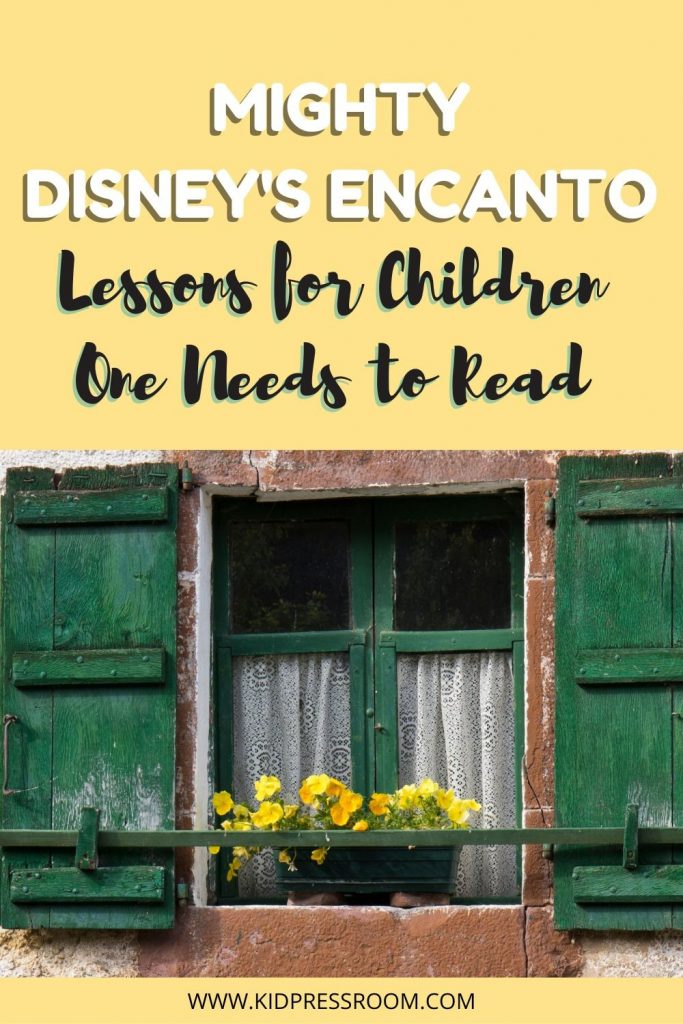 You may also like: What Pixar’s ‘Inside Out’ Teaches Children About the Importance of Emotions

What is Generational Trauma?

The trauma can vary from physical abuse to slavery, though it can expand through other traumatic experiences from individual family members.

Generational trauma has a trickle-down effect, of sorts. One significant event can manifest into smaller, more personal traumas and flaws as generations grow.

Although all families deal with generational trauma, it runs greatly through families of color. It can be for many reasons, some expanding beyond the ones I mentioned above.

That is to say that–regardless of what it may be–generational trauma derives from just about any traumatic event.

In a dysfunctional family, many issues originate from the elders.

Whether that be from their own dysfunctional households as children or other traumas in life, there is bound to be a place of origin for generational trauma.

Encanto depicts this lesson for children in a simple manner through the backstory behind the miracle candle.

For anyone who hasn’t watched it, Abuela Alma’s husband (Pedro), sacrifices his life for her and their people after fleeing from their home.

Through this sacrifice and receiving the miracle, Abuela Alma makes it her priority to ensure the family keeps the miracle burning with their acts of service to the town.

This trauma is the foundation of Abuela Alma’s actions towards her family members–especially the main character–as she navigates keeping their miracle afloat.

Children can take it as a means of understanding that some actions from their relatives have a deeper meaning and reason, although it does not excuse the behavior.

Encanto signifies the importance of voicing these traumas, whether through song or spoken dialogue.

Communication is the Best Way to Understand Generational Trauma

As children, we tend to find unconventional ways to communicate.

It’s why tantrums and spontaneous outbursts are so common among children. They have difficulty communicating their feelings with a caregiver until they learn and practice.

The same thing applies to families suffering from generational trauma.

In Encanto, the family does not engage in communicating their issues with one another. Instead, it festers until their familial foundation falls apart at the seams.

By the end of the movie, a brief conversation between two characters results in breaking down the wall that their generational trauma built.

It takes hearing out Abuela Alma for the main character to understand the trauma their family has endured for fifty years.

While the movie does not outwardly imply that the family forgives Alma for her wrongdoings after her confession of hurting the family, it does imply that they are working on their issues.

In every family, there are certain dynamics that apply to most members:

* Grandparents being the close-minded patriarch and matriarch.

* An older sister that takes on family burdens.

* An irresponsible younger brother who receives special treatment from his parents.

These dynamics unintentionally put family members in an inescapable box.

Take Luisa, for example. She is the strongest in her family, both physically and mentally. Although she is the brawn of the bunch, her need to take on the burdens of her family makes her reliant on her gift.

In the same breath, her older sister Isabela is the golden child in the family. Beauty and talent are her strengths, though she wants to break free of being the perfect eldest daughter.

The family matriarch makes it her mission to ensure the family upholds these gifts without faltering. Through Abuela Alma, the movie also depicts the unintentionally toxic nature that pushing family dynamics can have on those reinforcing them.

In the end, Encanto shows children that these traditional dynamics may take a negative toll on family members.

The Academy Award-nominated Encanto tackles generational trauma, family dynamics, and its negative effects through stellar songs and a heartbreaking story with a humbling ending.

Dysfunctional families are not an uncommon thing in the real world. But it is sobering to see Disney depict a dysfunctional family in a manner that is realistic to specific personal situations.

From the issue of traditional family dynamics to the significance of communication, Encanto flawlessly tells the story of flawed individuals.

It hones in on wanting children to understand that while generational trauma offers reasons for unhealthy behavior, there are ways to break the cycle of trauma and abuse.

Have you seen Disney’s Encanto? If you have, do you see these themes in the story? If not, what did you take away from it?