The animation era of the early 2010s brought on a series of successful films for Disney and Pixar. From Brave to the smash hit that was Frozen and Encanto, the company released an array of iconic films.

One film behind those has become an underrated gem in the era of three-dimensional animation.

In this next installment of What Disney Films Teach Children, we’re discussing the 2011 Disney animated film Tangled.

What Does Disney’s ‘Tangled’ Teach Children?

The beloved film discusses identity and a sense of belonging in many creative manners. Not only that, the lessons Disney’s ‘Tangled’ teaches children are specific and delve deeper than surface-level discussions.

It highlights a lesson about toxic parenting, addressing certain parenting methods and habits that inherently harm children– the reason I’m discussing them today. 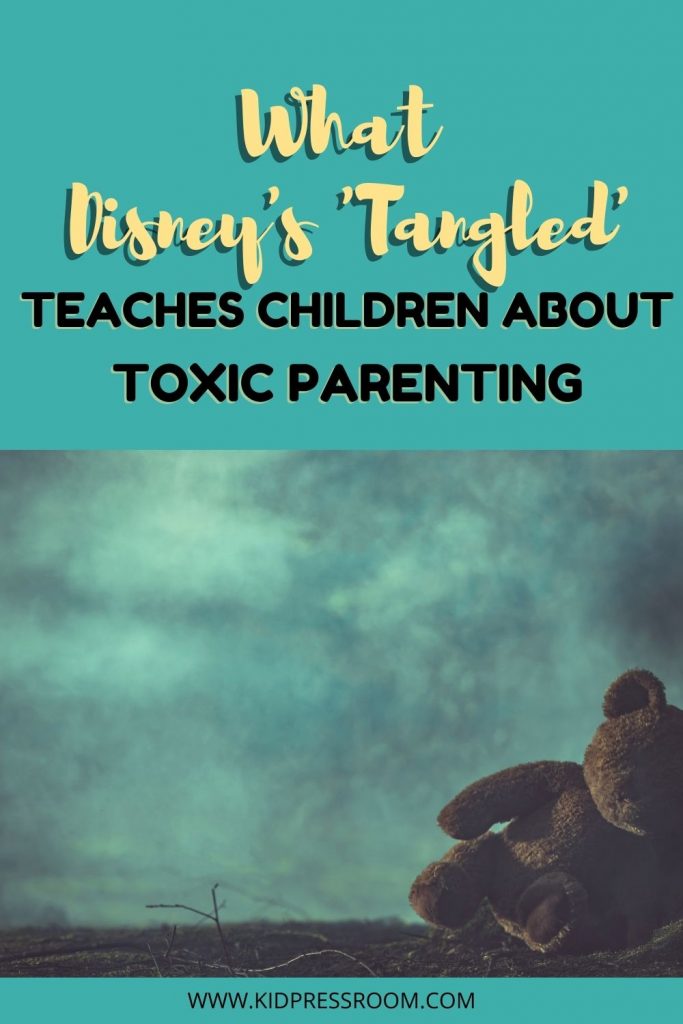 You may also like: What Pixar’s ‘Inside Out’ Teaches Children About the Importance of Emotions

Parents Are Meant to Uplift Children, Not Bring Them Down

Throughout the film’s beginning, it is clear that Mother Gothel tends to bring down Rapunzel as a means of keeping her locked in the tower.

In one of these moments, Mother Gothel and Rapunzel get into an argument regarding the younger girl’s outside freedom and wish to see the annual lantern show. Mother Gothel, rather than accepting Rapunzel’s plans, condemns her and promises she will remain locked in the tower.

This specific scene points out the toxicity of this type of parenting. Tangled uses Mother Gothel’s lack of encouraging skills to relay a message to children about why this is a problem.

The audience can visibly see that her actions put a hindrance on Rapunzel’s well-being, especially after Gothel leaves. Rapunzel continuously questions herself and her worthiness due to Gothel always bearing down on her.

It goes to show how not supporting and uplifting children can damage their mental health.

The film helps the audience sympathize with Rapunzel and her situation. Not to mention, it paves the way for excusing her disobedience to Gothel’s demands.

Children Are Meant To Live Life for Themselves

As children, we tend to have dreams of a life we wish to live – being a singer, dancer, or astronaut, among other things.

However, parents have dreams of a life they want for their children. They may wish for a lawyer and doctoral career to ensure success and financial stability.

On the other hand, some parents’ rationale may come as wish fulfillment for careers they couldn’t get into.

Tangled discusses this point through Mother Gothel using Rapunzel’s hair as a means of keeping her youthful. Although the symbolism takes creative liberties, it is a nod to parents that keep themselves within their prime through their children.

Mother Gothel continuously makes comments about keeping Rapunzel in the tower forever, dangling freedom in front of her face without much remorse.

It mirrors the acts of parents who voice possibilities of freedom as children age into adults, only to take back their sentiments for the sake of keeping the child by their side.

Despite Mother Gothel’s pleas for Rapunzel to stay put, the girl sets these warnings aside and explores the outside world for herself.

This explicitly teaches children the importance of exploring life and the world for themselves. While parents can protect them from certain incidents, allowing kids to explore independently ensure much trust between a parent and child.

Also, by avoiding any type of parental pressure, parents can support their children’s self-esteem and mental well-being.

Emotional Abuse Is Not Normal

Rapunzel’s experience with the outside world was the catalyst for understanding how other people functioned.

Her love interest, Flynn Rider, shows her much kindness after their sour first encounter. She goes to great lengths to explain the issues present between her and Mother Gothel, which concerns Flynn in many instances.

Mother Gothel’s song “Mother Knows Best” is a prime example of the emotional abuse and backhanded comments she throws at Rapunzel.

The audience isn’t shown much else about Rapunzel’s younger years of adolescents or childhood. Though, it is easy to see that Mother Gothel’s emotional abuse is long-running.

Through Flynn Rider’s character, Rapunzel is able to see that the way Mother Gothel speaks to her is not normal, by any means.

Also, the movie consistently explores Rapunzel’s feelings as she deals with the aftermath of Mother Gothel’s emotional abuse.

It teaches children that this toxic aspect of parenting is not deserved, nor is it appropriate.

As young children, we internalize everything our family tells us. Whether that be negative or positive, their words can affect us later in life in the worst ways possible– as the National Library of Medicine shows in a study that explains the correlation between parents’ “harsh verbal discipline and adolescents’ conduct problems and depressive symptoms.”

After Rapunzel escapes the tower with Flynn Rider, she goes through a series of emotions about her departure. She deems herself a terrible daughter numerous times and has a slight breakdown in the midst of the action.

This shows her mind’s fragility and the low self-esteem she suffers from after years of emotional abuse. Paired with outside exposure after eighteen years of staying inside a tower, Rapunzel is the personification of what toxic parenting can do to a child.

Conclusion on What Disney’s ‘Tangled’ Teaches Children About Toxic Parenting

Like many Disney films, Tangled tells a somber story through creative eyes.

It discusses more than Rapunzel’s golden hair and Flynn’s perfect smolder. In fact, those are just surface-level highlights of the film.

The film talks about toxic parenting and the effects emotional abuse can have on someone later in life. Plus, it relays a message to children about these difficulties and the questionableness of emotional abuse.

These messages and the movie’s underlying themes show that Tangled is more than another Disney princess film. It expands beyond the ordinary tropes and pulls back the layers of a real story about a lost teenager looking to escape her situation.

What do you think of Tangled? Do you believe what Disney’s ‘Tangled’ teaches children is another romantic princess movie with flowery music? Or is there more to the story?