Why We Need Diversity in Children’s Literature - KIDPRESSROOM

Think for a moment about the books you read and enjoyed as a child. What characters are the most memorable? Do they look or act like you?

If they do, you’re in the fortunate majority of readers. In 2018, the University of Wisconsin-Madison School of Education Cooperative Children’s Book Center reported that at least 50% of children’s books published that year featured White characters.

The next most published characters, at 27%, were animals.

This means that any other racial group is only represented by about 23% of the year’s published books.  It is obvious that we need diversity in children’s literature, and here are the reasons why. 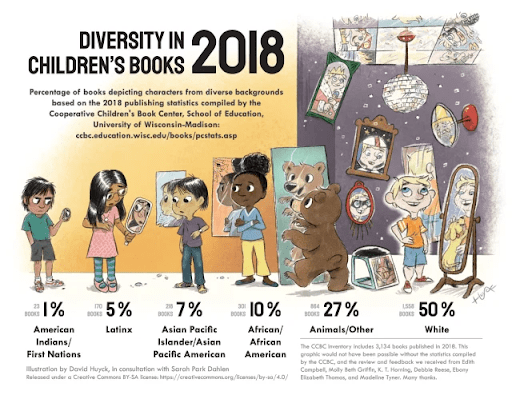 Why Do We Need Diversity in Children’s Literature?

We improved only marginally upon the data reported from the same project in 2015. While 73.3% of children’s books in the 2015 publishing year were about White characters, animals still took up about 12.5% of the total, with lower percentages for the other groups across the board.

Thus, we see that in the three years between studies there has been more distribution from the White characters group into the animals group and little change for any others. 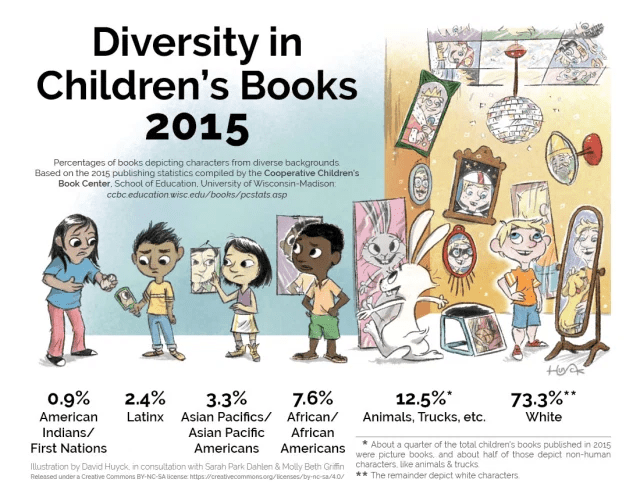 The Reality of Diversity in Children’s Books

During the summer 2020 racial justice demonstrations, I decided to take a survey of my Instagram followers’ knowledge of diverse children’s books, specifically books about Black people.

I asked one open-ended question:

“What books did you read about Black characters during your childhood?”

I also encouraged participants to provide a response even if they could not recall any such stories.

The majority of people who responded to the survey could not name a single book they had read at any point during their childhood that was about a Black character.

Of those who responded with a book in mind, the most popular book recalled by far was Harper Lee’s To Kill a Mockingbird, which is not even a book aimed at young children and is usually a required read in high school.

A Short History of Children’s Literature

The earliest children’s literature was very Eurocentric. The very first children’s book in the world didn’t arrive on the scene until the publication of A Little Pretty Pocketbook in England in 1744.

Most of what we know today as the “classic” children’s books were published in the United States and England between the late 1800s and early 1900s. And we all know that the world has drastically changed since then.

But it’s not just race that goes underrepresented in children’s literature. Also missing is variety in neurodiversity, sexuality, ethnicity, religion, ability, and culture.

Can you name a children’s book off the top of your head about a character who is a wheelchair user?

What about a book about a Muslim family?

Certainly, these books exist, but in nowhere near the quantity or quality we should expect from such a diverse world.

You may also like: Why Greek Mythology is Appealing to Every Age Group

The Importance of Diversity in Children’s Literature

Diversity in children’s literature is important for all, and especially for children who identify with different communities.

It helps children learn about themselves and feel like they have a valid place in the world. Without it, they may feel invisible or inferior to those we more frequently see books written about.

When we fill the shelves of bookstores and libraries with books about the same kind of person, we tell those who don’t fit the mold that they don’t belong.

Imagine how detrimental that is to children just starting to think about themselves in society.

If you never read books about different experiences, you have a harder time developing empathy for what others go through.

If there were more books available that mirror an actual sample of the world’s population, children would learn respect for other identities as well as their history at a much earlier age.

While historical fiction exists in no shortage for school-aged readers, it is simply not sufficient in teaching children about other communities.

We cannot treat minority groups as people of the past, because they very much exist in the present.

Historical fiction has its place, but stories about people of today are equally important.

How to Bring Diverse Children’s Books Into the Dialogue

Several new coalitions and projects have formed to answer the call to publish more children’s books by and for underrepresented communities. Some examples include We Need Diverse Books and the Build a Better Book Project.

We Need Diverse Books (WNDB) is a 501(c)(3) nonprofit organization that pushes for all young readers to be able to see themselves reflected in the pages of a book.

On their website, they state that they define diversity as “all diverse experiences, including (but not limited to) LGBTQIA, Native, people of color, gender diversity, people with disabilities, and ethnic, cultural, and religious minorities.”

Some of their programs include scholarships for diverse students hoping to enter the publishing industry, the creation of awards to recognize diverse authors and stories, and partnerships with schools to bring more diverse literature to classroom libraries.

The WNDB website also includes tons of resources for those looking to read or write books in areas of diversity.

The Build a Better Book Project, based out of the University of Colorado Boulder, hopes to inspire people to use new media, such as 3D printing and laser cutting, to make books for children with visual and other learning impairments.

These multi-modal creations come in an infinite variety of forms and are slowly being implemented in libraries and schools across the country as alternatives to the traditional style of bound-book reading, which can be inaccessible to some children.

I like to think that we are growing steadily more accepting as a society of all identities of people.

The best way to move forward towards this goal is to introduce children to the world that exists outside of their family, friends, or perhaps even their classroom.

So this is why we need diversity in children’s literature: because children rely so much on books to shape the way they perceive the world.

What are your favorite children’s books about diversity? Let us know in the comments below.