What's the Problem with the Fanfiction Writing to Published-Book-Pipeline?

Fanfiction has taken the world by storm. From Wattpad to AO3, fanfiction writing is a means of exploration and improvement as a writer.

Many popular films are based on published fanfiction writing, such as the infamous Fifty Shades of Grey and the After film series.

But first, understanding what fanfiction is will further cement the significance of these matters.

Fanfiction is the act of writing fiction based on a particular fictional world. These fictional worlds vary from television shows and films to books and comics.

Overall, fanfiction contains altered versions of canonical characters or original characters meshed into the original plot of the work. Some fanfiction writing includes an entire reconstruction of the canonical world as a means of filling plot holes and furthering world-building.

What’s the Problem with the Fanfiction Writing to Published-Book-Pipeline?

Fanfiction is a debated source of creative writing. Some argue that fanfiction is illegal, as writers are using copyrighted characters.

Others argue that due to its transformative nature, fanfiction falls between the morally gray lines of fair use–while this discussion will continue during the monetary discussion surrounding fanfiction writing. 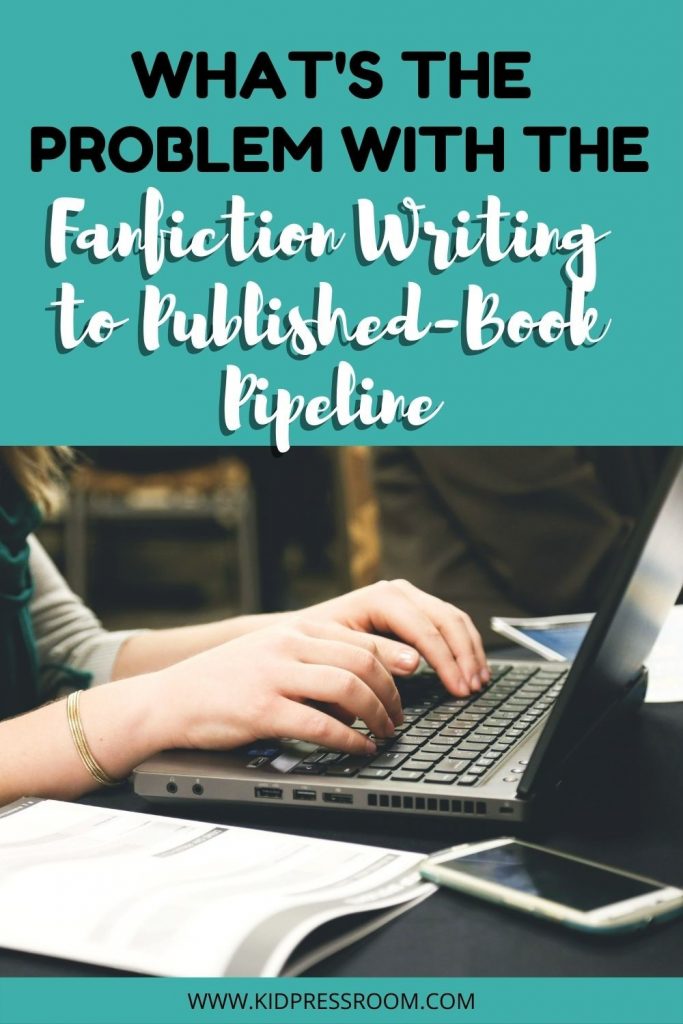 You may also like: Why Do Readers Love the Enemies-to-Lovers Trope in YA Fiction?

It is a widely known and accepted conclusion that a great deal of fanfiction writing contains semblances of unhealthy themes and plots. Such unhealthy themes include toxic relationships, sexual assault, domestic violence, and misogyny.

Once a piece of fanfiction becomes a published book, these themes are out in the world.

They are tangible for young audiences to reach and understand in their own way.

This is not to say original fiction cannot approach and tackle these themes. In fact, tackling these themes can help not stigmatize its content.

Some fanfiction writing tackles these themes without presenting them as an issue, though. In addition, if they present such themes in their stories as issues, the author plays it off as excusable due to a traumatic background.

For example, E.L. James’s Fifty Shades of Grey discusses toxic relationships and sexual assault in a manner that coincides with the previous statement. The secondary protagonist, Christian Grey, has a traumatic past and this is used as an excuse for his treatment of the primary protagonist, Anastasia Steele.

The book is a direct fanfiction of Stephanie Meyer’s Twilight and its primary protagonists, Edward Cullen and Bella Swan. The fanfiction takes inspiration from the teens’ questionable relationship and surrounds it with more adult issues.

Another example of this subject is Anna Todd’s After. Previously a Harry Styles fanfiction posted on Wattpad, After is an explicit novel surrounding the turbulent relationship between Hardin Scott and Tessa Young.

In this case, the problem with the novel is that it excuses and justifies Hardin’s actions up to a point. Also, it insinuates trauma is healed at the hands of romantic relationships with inexperienced women.

Fifty Shades of Grey has a similar situation, in which the male lead finds solace from his trauma after beginning a relationship with the inexperienced protagonist.

Some teens may not be able to understand why this mindset is harmful, especially as the theme presents itself throughout the series

The problem with this repurposing is that while character motivations are slightly different, it is evident that the characters are from their original source.

Cassandra Clare’s City of Bones is known for being an altered version of her Harry Potter fanfiction. Clary Fray functions as Ginny Wealsey, Simon Lewis is Harry Potter, and Jace Wayland fills the role of Draco Malfoy.

Repurposing characters is not necessarily a bad thing. Fanfiction is infamous for expanding on these unkempt qualities under the creative freedom that fanfiction writing offers.

Nevertheless, many published fanfiction books are known for having flat and underdeveloped characters.

Although this is not entirely the fanfiction author’s fault, as this is the catalyst for fanfiction writing itself, it gives more to an existing world than its origins. Thus, it transforms many elements creatively.

Now, the fault does lie in the fanfiction being repurposed as an original work. The problem here is that some authors do not tweak their characters to add dimension and allow them independence from their fanfiction origins.

The Monetary Issues of Fanfiction Writing to Published-Book-Pipeline

It is well-known that profiting off of fanfiction is illegal, as it is copyrighted content.

Cassandra Clare gained monetary success from her Harry Potter fanfiction with little to no alterations that some say soured the book, especially compared to its fanfiction origins.

Clare’s success from her novels resulted in a film and television adaptation of her stories, along with numerous spin-offs centered around that world.

Fifty Shades of Grey had a similar outcome. Having been a Twilight fanfiction turned New York Times bestseller, the explicit adult series has achieved huge monetary success and received profitable film adaptations in its wake.

With that being said, these published books indirectly profited off of fanfiction, continuing a harmful stereotype about fanfiction. It resulted in many people–authors included–believing that fanfiction is lazy.

Fanfiction writing contains heaps of stereotypes that separate it from other fiction genres. From the cliche self-inserted character to amateur writing and laziness, it does not stray far from these criticisms.

Critics and readers alike integrate more harmful stereotypes into reviews. This is especially true when it pertains to the fanfiction writing to published-book-pipeline.

Although not all fanfiction writing to published books contain such negative stereotypes–in fact, there are many fanfictions that build beyond the original canon and characters of a world–some of the more popular published books are synonymous with these issues.

Anna Todd’s After reads as polished fanfiction for publication. E.L James’s adult series also reads in such a manner that it comes off as questionable writing.

This is not to say that for some all fanfiction writing is lazy. Back to the previous issue, gaining monetary success by recycling a world or characters that do not belong to you–or slightly altering identifiable plot points and characters to pass it off as original content–comes off as lazy.

The major issue is that fanfiction that has been published as an original work only made slight tweaks to the plot and repurposed characters. This results in overcomplicated storylines and characters with little purpose and dimension.

The fanfiction writing to published-book-pipeline is a controversial phenomenon. Much of the popular YA novels present these published books and take the genre by storm.

Many of these fanfiction writings contain dark themes and repurposed characters that do little to evolve and expand the world a writer alters. Plus, lots of these published books still contain complex issues and stigmatize them in a manner that is harmful to many.

The fanfiction writing to published-book-pipeline demonizes all fanfiction writers into believing their content is not worth attention or publication. Also, the laziness of repurposing characters and gaining monetary success from such deeds hones in on the harmful stereotype that fanfiction is lazy.

All writing requires extensive work. While fanfiction writing has its ups and downs, the authors working to churn out content exclusively for non-monetary purposes are the ones who keep it afloat.

What do you think about the fanfiction writing to published-book-pipeline? Do you find it to be a problem or do you support it? What’s your take about it bringing in young and established authors?