How Films Influence YA Fiction - KIDPRESSROOM

Young adult entertainment has become one of the biggest mediums in the modern world. Have you noticed how YA fiction novels have overtaken the film industry?

Suzanne Collins’ Hunger Games graced big screens and gained success with its film adaptations, along with many others following suit. However, no one talks about films’ influence on YA fiction.

How Do Films Influence YA Fiction?

While other genres do influence and shed light about their particular genres on the big screen, young adult fiction has because very popular among films. For this reason, I’ve decided to explore why films have such a huge impact on the evergrowing YA fiction genre. 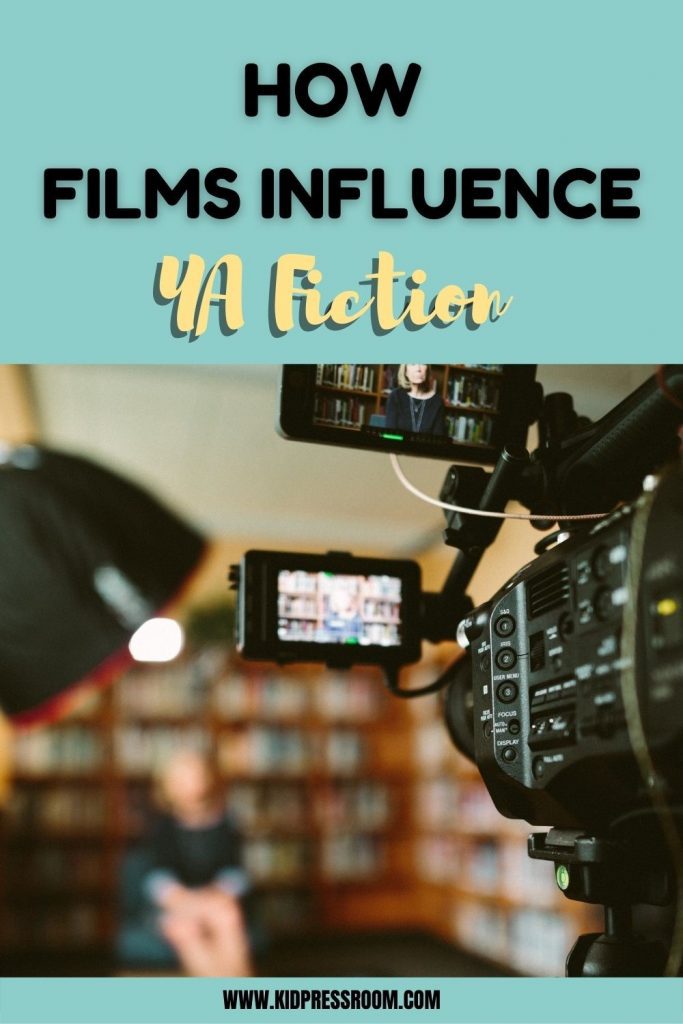 Films are our response to the culture around us historically, socially, and politically. All films, whether intentional or otherwise, respond to the world’s current cultural climate.

As a result, many films tend to become classics amid their success and ability to imitate the current state of the world. With this in mind, YA fiction may take from these classics for influence and inspiration. Because films influence our culture so boldly, they are bound to influence entertainment mediums within our culture, such as YA fiction books.

If you really think about it, YA novels and fiction are the page-clad versions of films, in which they imitate our culture in an exaggerated and symbolic manner. This is the point of art in culture. It is meant to help you understand culture in an entertaining and unassuming light.

When it comes to the big screen, films and scenes from films can deeply influence YA fiction authors. That is because they can help authors expand on scenes or receive influence from a particular snippet of dialogue. This, on the other hand, can work as a catalyst for a plot line or character arc.

Films Add Visuals to YA Concepts

To understand YA novels means to visualize their content. However, sometimes this is not enough. With films, they allow YA fiction to have a physical representation.

While these seem insignificant to some,  if you are a reader or writer of YA fiction, this means everything. Seeing the visuals and understanding the concepts on a deeper level improve your visual imagination. Also, visual cues can garner a wider audience that finds interest in these symbolic images without having read nor understood the source material.

When I watched Knives Out for the first time, I adored it. I found the grandiose set design beautiful. The characters were intriguing and mischievous in their own rights. And the tone just sat right with me. This influenced me to read Jennifer Lynn Barnes’s novel The Inheritance Games, as its premise was entirely similar to the film.

As a result of my love for the film, the book was an engaging and enjoyable read. The film’s visuals allowed me to project onto the book’s descriptions of certain locations. Thus, it prompted me to purchase the next installment in the series.

In other words, the film prompted me to read more YA fiction novels that had the same tone as a film I liked. It also helped the genre gain an audience from somewhere that would otherwise not happen.

Some Films Look Better On Pages Than Screens

Many of us have heard of book-to-film adaptations. It is one of the primary reasons why YA fiction is such a popular genre among book readers and film watchers.

But there is also such a thing as adapting films to novels. This is another reason why films are so important for YA fiction. They can influence more books for you to get into.

While this is not categorized as a young adult novel, Guillermo del Toro’s critically acclaimed The Shape Of Water garnered much success and popularity. As a result, author Daniel Klaus collaborated with the director to make a book adaptation to the film.

By adding visual concepts to YA novels, they garnered new audiences that would previously not exist. Del Toro and Klaus’s book added more substance to the film that wasn’t present due to stylistic reasons–though that only added to its success.

The film Alien also received its own novel after the movie’s initial release, titled Alien: The Official Novelization. Although science fiction, its influence on YA fiction is significant and makes the Alien series all the more legendary in its own right, book and films.

Final Thoughts on Films Influence on YA Fiction

Films hold much cultural significance. So much so that directors and authors work together to create new art forms that bring both writing and filmmaking together. This means adding lore or bonus content to an existing world purely for screens.

Films add visuals to YA fiction and highlight its themes and morals under symbolic imagery for diverse audiences to interact with. They influence the creation of more books and more fans to enjoy the works.

How do you feel about films and their influence? Do you feel that they have any impact on the YA fiction genre? Have you ever had a film that influenced you to write or read an engaging book?