4 Authentic LGBTQ+ Book Awards for Youth You Need to Know

When thinking of book awards, which ones come to mind? Maybe you considered the Pulitzer Prize or other big awards.

You also likely thought of books that are now well-known to be classics. The ones you had to read in school and were considered necessary for all readers.

But what happens when we only award stories about certain struggles, themes, or subjects? Inevitably, someone or some group is left out of the narrative.

Why Are LGBTQ+ Book Awards Important?

This is why book awards for youth focused on LGBTQ+ content are so important. Not only do they give recognition for excellent literature featuring or having to do with queerness, but they also provide exposure and spread the word about these exciting new titles.

The reality is that there are so, so many book awards. And without them, schools, teachers, librarians, readers, and a multitude of people would have a hard time finding content that tells a narrative that should be represented.

For this reason, we decided to share a few of those. Here are priceless LGBTQ+ book awards for youth, centered around queer authors, stories, and issues that you should check out. 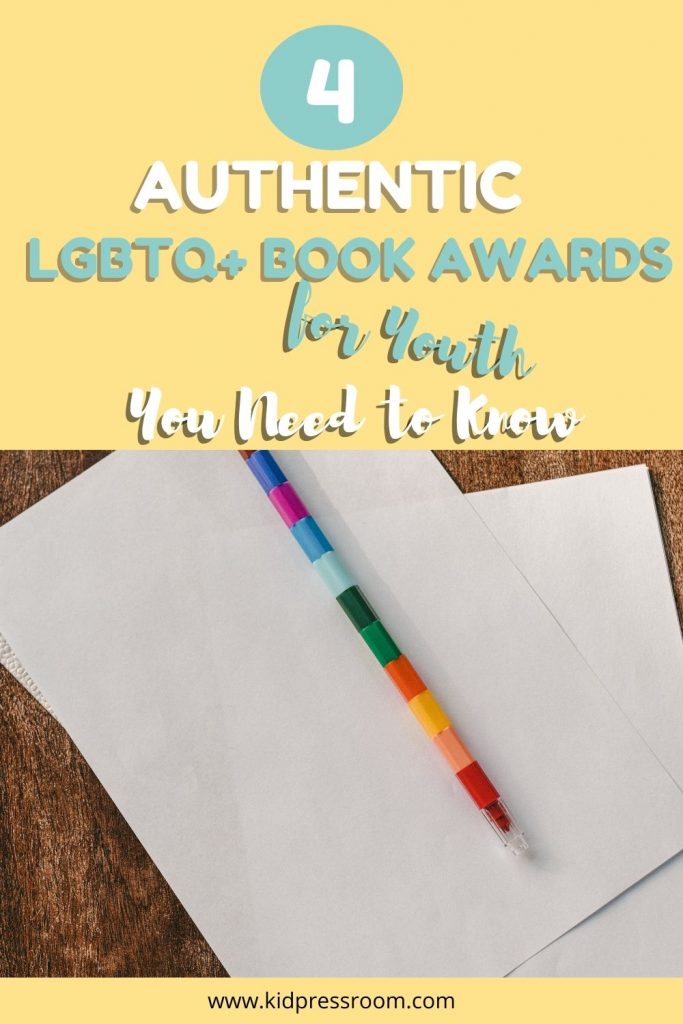 You may also like: How to Confidently Describe People of Color in YA Literature

The Lambda Literary Awards were created in 1989 for the purpose of highlighting the narratives of LGBTQ+ people, along with LGBTQ+ authors.

Their awards are held in June (Pride month!) in New York City and have as a goal to create, celebrate, advocate, preserve, and affirm LGBTQ+ writers and stories.

Children, teens, and young adults also have their voices heard. They can safely discuss LGBTQ books through the Writers in School Program — a partnership between Lambda Literary and the NYC Department of Education.

This program brings award-winning LGBTQ literature into the classroom and allows for healthy discussion of LGBTQ+ books, author visits, and the development of an inclusive curriculum that supports the LGBTQ+ community.  It serves students grades K-12. It’s worth checking out!

The Stonewall Book Awards began in 1971– only two years after the revolutionary Stonewall uprising in New York City that changed LGBTQ+ history forever. It is presented by the Rainbow Round Table, which is a group within the American Library Association.

Nowadays, they are given within three committees: the Barbara Gittings Literature Award, the Israel Fishman Nonfiction Award, and the Mike Morgan and Larry Romans Children’s and Young Adult Literature Award.

The Stonewall Book Awards have a memorable logo that allows the reader to instantly recognize that whatever book they pick up is related to LGBTQ+ content: a silver emblem with a triangle and a pink circle.

The beauty of this award is that anyone can recommend a title, so long as they are not the author of or in any way affiliated with the book. So if you are looking for well-regarded LGBTQ+ book awards for youth, you should consider this one. You can learn more about suggesting LGBTQ+ books for children and YA here.

The goal of the Publishing Triangle is to not only spread LGBTQ+ content through literature but also allow queer authors and publishers to connect and network. It is also the second on our list of LGBTQ+ book awards that began in 1989!

The Publishing Triangle Awards have many categories, but some examples include Debut Fiction, Trans and Gender-Variant Literature, The Edmund White Award for Debut Fiction, and both Lesbian and Gay nonfiction (as separate categories).

Though these awards are not directly tied to the youth,  writers of any age can submit to the Edmund White Award for Debut Fiction — so long as their work is LGBTQ-focused.

The Publishing Triangle, “a national association of lesbians and gay men in the publishing industry,” sponsors the awards.

The Bisexual Book Awards are sponsored by the Bi Writers Organization. They not only focus on books, but also on other content like the arts and entertainment in relationship to bisexual or pansexual representation.

The group was formed in 2006 and is run by Sheela Lambert. In 2014, Lambert published the Best Bi Short Stories anthology, which was a huge milestone in bisexual representation.

The submissions are judged by both the quality and quantity of bisexual representation. There are also over a dozen submission categories, including the Bisexual Teen/Young Adult, making it a thrilling LGBTQ+ book award addition for the youth.

This award requires a single contribution of $35 to cover operational costs — the fee allows you to submit one book to multiple categories, though.

The group also creates other media and events, like podcasts, workshops, and virtual meetups!

LGBTQ+ representation is important in all types of literature. Without representation in the media we consume, young LGBTQ– or the LGBTQ community as a whole for that matter– may feel excluded, beginning to believe that their lives are invalid, or that they are abnormal for some reason.

Highlighting excellence in LGBTQ+ literature for youth is invaluable for young adult readers who yearn for representation in the books they read.

Do you pay attention to book awards? Do you know any other LGBTQ+ book awards for youth to recommend? Comment on the one you rely on the most for selecting your reads!

There is no author description yet.