Why LGBTQ+ Representation Matters in Youth Literature (Plus Books)

As individuals, we try to find ourselves when we are teens. For LGBTQ+ folks, oftentimes, these identities are actualized during the teen years. And youth literature is what we read at this age.

Without representation, we are left feeling like we don’t have a place in this everyday life that is shown in the literature. We feel we don’t belong, or even aren’t meant to be where we are. We feel like we have no place with our families and friends or in school as who we are.

This leads to not being honest about ourselves and sometimes hiding our various identities. For example, if we see no gay characters in the books we read, we may assume that they simply don’t exist. Then, when we see these identities in ourselves, we deny them and push them down– desperately trying to make ourselves believe that they don’t exist and that we are “normal,” as not being LGBTQ+.

Denying our identities is toxic to our health. We must embrace who we are in order to live happily as our true selves. Good representation helps us with this process.

The importance of good LGBTQ+ representation in youth literature

Good LGBTQ+ representation shows people living with their identities without denying them or oppressing them. Or, if it does not portray these identities, then it shows how we can embrace who we are after going through a period of pushing our real identities down.

Good representation is raw about the issues we may face when coming out or realizing who we are. It is realistic about what it means to be ourselves.

YA Books with Good LGBTQ+ Representation 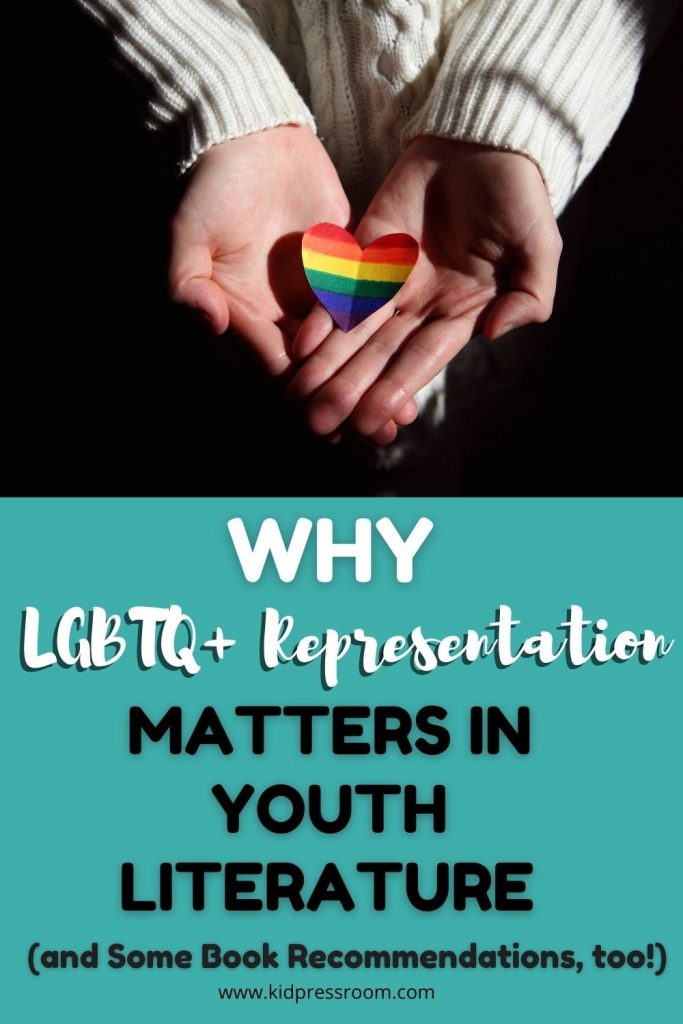 You may also like: 5 Amazing Children’s Books Featuring LGBTQ+ Characters

1. Aristotle and Dante Discover the Secrets of the Universe by Benjamin Alire Sáenz

Aristotle and Dante are Mexican-Americans in the 80s dealing with issues of racial identity, family, and sexuality. They meet at the swimming pool and become friends.

The novel is about their friendship as they come of age, and it blossoms into a romance that the reader may enjoy.

2. The Miseducation of Cameron Post by Emily M. Danforth

Emily M. Danforth tells the story of 12-year old Cam, who has to move in with her aunt and grandmother after both her parents die. She then begins a romantic relationship with a girl. Soon after discovering this budding romance, her aunt sends her to conversion therapy. Cam must deal with the ramifications of her aunt’s action while finding herself all at the same time.

The Miseducation of Cameron Post takes place in the 1990s in Montana. And it is a raw story about finding oneself while being simultaneously forced to hide oneself, too.

3. I’ll Give You the Sun by Jandy Nelson

This novel follows twins Noah and Jude, who, at first,  are close but grow apart over time. The first half of the book is told by Noah, who’s gay. The second is told by Jude, a once fiery girl who shut down after the death of their mother.

The two siblings face romantic relationships, death, social issues, and much more in this coming-of-age novel about the importance of family.

I’ll Give You the Sun makes for an excellent representation of coming out, as Noah realizes that he is gay and makes amends with this fact.

The book Dreadnought follows Danny Tozer, who’s transgender. She inherits the powers of a superhero named Dreadnought, and her body is transformed into a conventional “girl’s body.” But, there are unforeseen obstacles headed Danny’s way–who thought it could be so hard being a girl?

Danny faces issues of friendship, family, and relationships. If it’s not enough, she takes on the responsibility that Dreadnought has left her with– she must deal with trying to stop Utopia, Dreadnought’s killer. Will she be able to handle it all?

In short, LGBTQ+ representation matters a ton when it comes to books. This is a way we can see ourselves in the books we read.

When we aren’t represented, we have a hard time relating to the story being told, and it makes a huge difference in how much we enjoy the story.

The novels above are only a short but important sample. And they represent LGBTQ+ narratives in a great way that allows their stories to be told, shared, and related to.