Every adult on Earth can say that puberty is a difficult time.

The sweating, the smelly crevices, the sudden romantic feelings for peers they previously hated. It’s one of the most confusing times for a young person.

And it’s no easier for parents, either.

Pixar’s Turning Red tackles this in one of the most unique ways possible: a giant, fluffy red panda.

The movie isn’t just about puberty, though. It’s much deeper and more complex than the simplistic theme of puberty and changing as an adult.

After thousands of rewatches, I’ve figured out that Turning Red formats itself as a visualized love letter to youth by tackling the flaws of adolescence.

What is Turning Red About?

Turning Red is Pixar’s newest film on the difficulties of adolescence. More specifically, on the growth of a thirteen-year-old Chinese eighth grader living in Toronto, Canada in May 2002. Her life takes a shocking turn when she transforms into a red panda.

Having to deal with the aftermath of these events, along with her favorite band coming to Toronto, Meilin learns to see the change within herself throughout the movie’s entirety. She also works on healing internalized issues with her mother.

Without giving much of the story away, Turning Red acts as a means of helping children understand a deeper, uglier part of themselves. This is especially true for the children who see themselves as weird.

Here are three reasons Pixar’s Turning Red message for youth is powerful and embodies the flaws of adolescence: 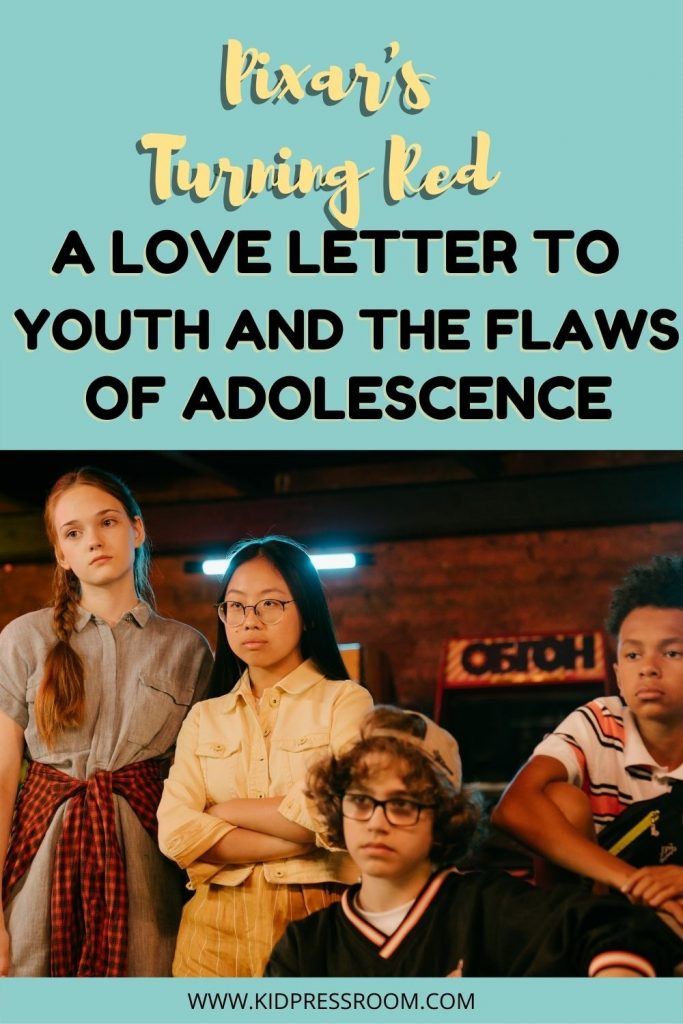 You may also like: Remembering the Dead: 5 Disney Animated Movies that Depict Death Thoughtfully

Turning Red Is A Love Letter to the ‘Weird Kids’

The film establishes that Meilin Lee and her friends are unlike their peers. Sharing matching friendship bracelets and obsessed with the world famous band 4*TOWN, the group stands out amongst the rest of the eighth graders in their year.

They engage in certain things that children their age could understand and enjoy. For example, Meilin draws fictionalized versions of her friends and the members of 4*TOWN.

On the other hand, her friend Abby tends to shout at people in the halls in Korean, while Priya hisses at people who cross her due to her obsession with a vampire teen novel.

To the outside world, they count as weird kids. Although much of their behavior is normal and appropriate for their age demographic, some people do not see their demeanor as appropriate behavior. Thus, deeming children who act like Meilin and her friends weird.

But the movie does not villainize their acts in any way. In fact, it paints their interests and personalities in a positive light. Even going as far as finding them endearing.

Turning Red acknowledges their labels and explores them as a way of adhering to the weird kids in the world.

It Shows that Growing Up Is Difficult

When Meilin Lee transforms into a red panda, her reaction mirrors the winding emotions that coincide with children who experience puberty.

More specifically, it showcases the difficult aspects of puberty and what makes it challenging.

It tells kids that growing up is not simple, nor is it pretty.

Meilin and her friends make comments about being sweaty and smelling. But one of the most important challenges Meilin faces is her uncontrollable emotions.

Throughout the film, the protagonist experiences severe mood changes. Although she learns to regulate them later in the film, much of her emotions spark the panda’s presence, as it wreaks havoc on her life.

The movie makes many moves to ensure the audience sees how difficult the panda can get, especially when Meilin experiences negative emotions.

When children understand that, they can attest to or find relief in the fact that their experiences may not be easy. But regardless of the circumstances, the difficulty may lead to surprising and life-changing results.

Meilin struggles not only as the red panda but as the transformation takes her away from her relationship with her mother.

This is an important point in the film and much of the movie centers itself on this idea. While Meilin navigates her newfound changes with the panda overtaking her life, she has a recurring fear of disappointing her parents because of her transformation. For example, Meilin voices her concerns about not being perfect for her mother.

On the other hand, the movie makes it known that this is not the case with all parents. Later in the film, Meilin’s father acknowledges that he finds the weirder and new parts of his daughter humorous. Also, Meilin’s friends admire and encourage her new viewpoint on her mother’s overprotectiveness and outlook on life.

Even though, in the end, Meilin’s insecurities remain, the silver lining is that she learns to work through her insecurities with her mother. She also understands that her mother is proud of her decision.

It movie takes a sweet turn that children and teens can relate to– without completely curing Meilin of her deep-rooted issues.

Conclusion on Pixar’s Turning Red: A Love Letter to Youth and the Flaws of Adolescence

All in all, Pixar’s Turning Red is about the ugly side of growing up.

Realizing your peers aren’t hideous, investing in the strongest antiperspirant, and making incredibly suggestive drawings of people you’ll never meet are just some of the peculiar parts of adolescence.

But that is what makes it such a wonderful time. The new emotions to navigate and difference in world views you may share with your family hardly mean your parents will be disappointed. Life is changing, and so are you.

The film truly encapsulates the life of a young teen navigating a troubling time and troubling issues. However, it never works to diminish these issues or completely dissolve them.

It functions as a visual hug for those who can sympathize and empathize with Meilin’s changes, and her worries about disappointing her family.

And that is the type of film that children and teens need.

What did you think of Pixar’s Turning Red message for youth? Was it everything you expected? Did it feel like a love letter to youth? Or did it merely act as a fun story involving intriguing characters and bright visuals?