YA Protagonists: The Problem With Creating Self-insert Characters

Young adult protagonists are subjects of much criticism and praise in the writing community. Protagonists such as Bella Swan, Clary Fray, Katniss Everdeen, Tris Prior, and Hermione Granger make up a significant portion of discussions associated with young adult and teen protagonists.

However, while some of these protagonists endure great hardships and evolve as individuals over the course of multiple novels, few take the name of self-insert characters that reflect more than a mundane perspective in a fantasy or dystopian world. And that reflection hurts the literature more than improves its content.

Before understanding why self-inserts are such an issue among young adult writing and fiction, we have to know what a self-insert actually is.

Self-inserts are characters that authors create to reflect themselves in their stories and take advantage of their world building and characters.

Many fanfiction writers use self-inserts for themselves or fandom readers to differentiate them from canonical characters in the fictional world. Many of these take place in the form of “Y/N,” “Reader,” and “Character x Reader.”

However, self-inserts have taken a form in pop culture and published YA books, as well. One such popular example is Bella Swan from Stephanie Meyer’s Twilight series.

Physically, Bella is a fictional copy of her author, from the widow’s peak to the unique lip structure. The exception is that Bella successfully seeks out the beauty of immortality as a recent high school graduate with her mythical vampire partner.

This whimsical twist and Bella’s lack of self-awareness about her flaws are what make the self-insert such a controversial phenomenon.

What Is the Problem With Self-insert Characters?

So, this brings on the question, what is the problem with self-insert characters? 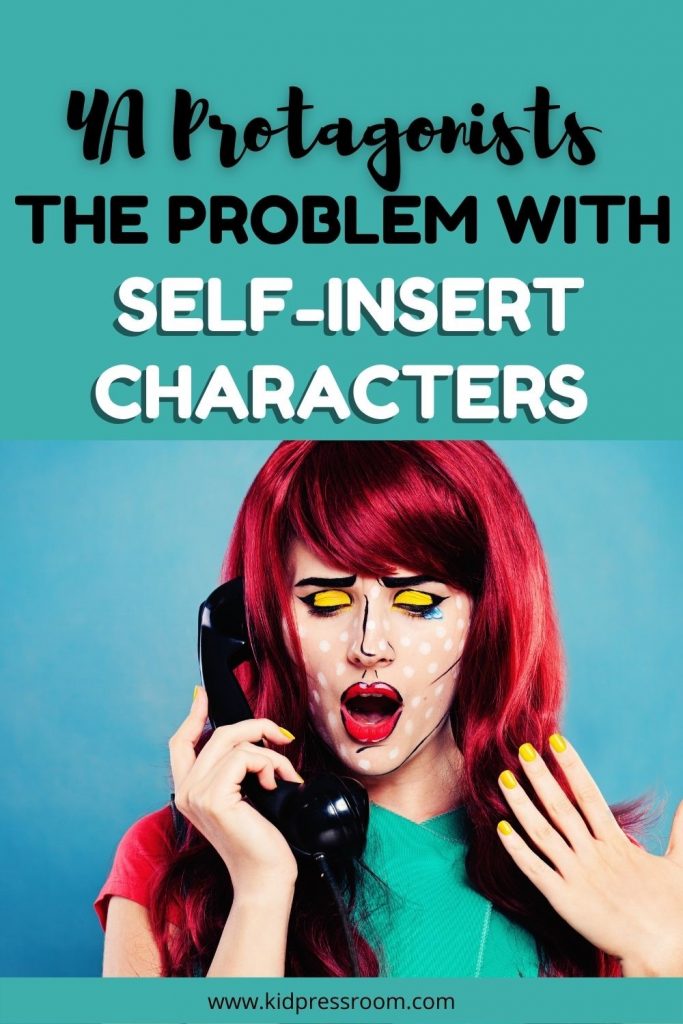 You may also like: Character Descriptions: How to Write for Youngsters

A particular issue among self-inserts is the lack of relatability. When it comes to young adult protagonists, young readers strive to relate to the protagonist because they reflect themselves in the story.

For example, many readers relate to Harry Potter’s Hermione Granger for her wittiness and unmatched intelligence as she navigates the wizarding world. While her personality is specific to her, she is an inspiration to many readers who share her brainy qualities.

On the other hand, Bella Swan’s characterization is so specific to Stephanie Meyer that there is a disconnect between her and the audience. From her music taste to her thought process, some readers may struggle to relate to Bella because her personality is specific to Meyer.

Some may see self-inserts as a clean slate for readers to insert themselves into the story, but specific physical and mental descriptions that reflect solely the author completely contradict this idea. In this case, self-inserts alienate the rest of an authors’ audience and result in dislikeable or uninteresting characters that readers disregard.

Unrealistic and Lack of Criticism of Flaws

Now, self-inserts have a troubling reputation for becoming what is known as the “Mary Sue.” The Mary Sue is a character, traditionally the self-insert, who has unrealistic traits and exudes behavior that is undesirable in a protagonist.

Usually overpowered, never disliked, and important for a world-saving purpose, Mary Sues are the stars of most young adult novels. This includes the self-inserted Bella Swan, as she is an average teen who attracts the attention of everyone around her for the sake of being the main character.

As a result of such ideas, self-inserts become unrealistic in realistic settings. The wish fulfillment associated with these characters results in a lack of self-awareness from the author that the character’s actions and personality will not suit all readers.

Stephanie Meyer’s character would gauge little interest as the new girl in the middle of the year in a realistic high school setting. Along with that, several male students had romantic feelings towards Bella after a brief, and sometimes bland, interaction with her.

To say the least, her characterization uplifts the average girl in a manner that comes off as unrealistic for some audience members. However, because she is the protagonist and a reflection of Meyer herself, Bella receives special treatment and has traits similar to the aforementioned Mary Sue.

Associated with those facts is the lack of critical thinking to process and understand flaws. Many self-inserts emphasize flaws, though do not work to change them. Instead, other characters point out such flaws and see them as lovable quirks that the self-insert should not work to change.

This is an issue, as it enables poor behavior and traits, and paints the self-insert in a positive light. In addition, it paints the author as aware of their flaws, and not striving to uplift their positive traits in turn of the negative ones.

Since self-inserts are reflections of authors, it does not take much to apply their personality to a singular character. This is especially true of fanfiction because the only character an author has to work on is an idealized version of themselves, as canon characters have distinct personalities and backgrounds.

While some authors can insert themselves into a story creatively, others cannot, and it deviates from the work it takes for the characterization of diverse and creative characters.

Not all protagonists require complex and diverse backgrounds to be interesting, by any means. However, this is not to say that protagonists should continue to stay underdeveloped and uplifted because they reflect the author and are a result of wish fulfillment.

Self-inserts are a controversial phenomenon. While they allow an author to experience their own world from a characters’ perspective, using self-inserts tends to lack any creativity or diversity to protagonists. Along with that, it perpetuates the idea that one should not be critical of their flaws, if those flaws are ones the individual can change.

Readers look to characters that are memorable and adhere to their personal endeavors and experiences. And self-inserts tend to deviate from that and remain exclusive to small groups of individuals.

While having characters that reflect your personality are not an issue, being completely self-indulgent can harm your YA story more than improve it. For this reason, when it comes to YA writing, writers should strive to use diverse characterization to depict multiple personalities and perspectives of life.

How do you use your creativity to balance the epidemic of self-inserts plaguing young adult fiction? What do you do to ensure inclusivity and diversity among your characters? Let us know your thoughts in the comments.

self-insert characters, self-inserts, YA books, YA characterization, YA protagonists, YA tropes, YA writing, young adult protagonist