A Short History of Children's Literature You Need to Know

It wasn’t until I took my first children’s literature class that I realized how nuanced and complex the history of children’s literature is. Children’s books and the concept of childhood, how we perceive children in society, have evolved hand in hand throughout the time of humanity more closely than one might expect.

Most people, like me, probably never thought about where the idea of the children’s book came from. To truly understand the way we write for children today, it is essential to look back through time to the first ideas of what exactly a child was, long before the first book for them was ever written.

Up until and even through the seventeenth century, children saw little difference in treatment from their adult peers. Low life expectancy and lack of access to formal education leveled the nuances in age gaps, so children were regarded almost as mini adults.

Most kids were put to work at very young ages to help support their families and many married young, going off to form their own families in their early adolescence. Generally, children were nowhere near as coddled as they are today, with most families emotionally distant and keenly aware of the chance that their child may not make it to adulthood.

As children were introduced to labor right away, their education was typically limited to developing obedience and practical skills that would support their ability to do work. There was no reading for pleasure and no teaching of communication, math, or science lessons like one would see in today’s school curriculum.

By the 1600s, the philosophy of childhood education began to spread across Europe. Ideas taught to children in the classroom setting were primarily based on religion, specifically Protestant Christianity, which was up and coming at the time.

One notable step towards children’s literature as we know it today happened in 1690 with the publication of the The New England Primer. This text was first used in England before making its way to the colonial United States, which back then was still a British territory. The primer, which we more commonly refer to today as a reading textbook, taught children their ABCs and basic reading skills through simple, religious-themed poetry and illustrations. While it still heavily focused on themes of morals and obedience, The New England Primer was the first tool that would inspire the creation of books that were meant just for child audiences. 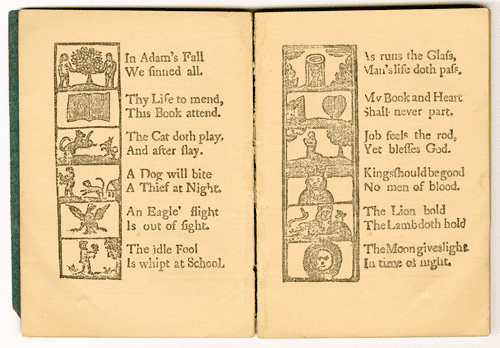 The New England Primer by Briscoe Center for American History

Widely accepted as the first true book for children, A Little Pretty Pocket-Book by John Newberry came out in England in 1744, almost fifty years after The New England Primer. If the name Newberry sounds familiar, that’s because he is the namesake of the Newberry Medal, the most prestigious award in the history of children’s literature.

A Little Pretty Pocket-Book, which features rhymes based on the alphabet, was incredibly successful because it was produced rather cheaply and contained advice for parents as well as the children’s reading material. The book was advertised so that if you were the parent of a little boy, a ball would be included with your copy of the book, and if you had a girl, the book would come with a pincushion. These were supposed as “gifts” from the entity Jack the Giant Killer, a character who had included a note to the child in the preface to the book telling them to be good.

Also a factor in the book’s appeal, as well as a major development in publishing, was its bright front and back cover pages. These caught the attention of children and made them want to open the book and learn what was inside, a phenomenon that future children’s book publishers would take note of.

In A Little Pretty Pocket-Book, we still see the themes of Christianity throughout the poems and songs that make up the content of the book. There is also still a great focus on obedience with emphasis that learning to be good is one of the most important things for a child to do.

Newberry would go on to write over a hundred more stories for children, which varied in popularity but paved the way towards the mass production of children’s books that we see today. His stories, poems, and magazines continued to gain traction for their simple structure and imaginative themes.

You may also like: Why We Need Diversity in Children’s Literature

After Newberry’s books took off, there was a new and growing market for children’s stories. People began to look at what other kinds of books could be produced for kids to enjoy. Many more stories were produced throughout the rest of the 1700s and 1800s which piggybacked off of Newberry’s success and themes of fun, but a lot of older stories were also published physically for the first time.

Most people are quite familiar with Aesop’s fables; the stories were originally told in the 6th century and passed down orally from generation to generation. Later on, these stories were then published and sold for children to use to learn to read and receive important moral lessons.

Other oral fairy tales, like Beauty and the Beast, were also reproduced in book form for the first time. This story, which has been popularized by the Disney movie, actually dates back to over 4,000 years ago.

New fairy tales also came to be. Hans Christian Andersen began publishing story collections during the 1830s, many of which are still well-known today. The Princess and the Pea, The Little Mermaid, Thumbelina, and The Ugly Duckling are among Andersen’s most famous and culturally pervasive works. Many of the great writers of the Golden Age of children’s literature were influenced by and took inspiration from Andersen’s stories in the creation of their own.

The Golden Age of Children’s Literature

By the time of what is considered the “Golden Age” of children’s literature (late nineteenth century to early twentieth century), book printing was cheaper and easier than ever. There was a gradual shift towards a style of children’s books more comparable to the books of today – lighthearted, whimsical, and funny stories.
The Golden Age of children’s literature is marked by the publishing of numerous classic children’s books that retain their greatness today. During the Golden Age, chapter books became increasingly popular for children who had advanced past the most basic short stories.

The first book to come of this period, Lewis Carroll’s Alice in Wonderland (1865) was not only one of the first books to be considered a “girl’s book”, but also pioneered the fantasy book genre. Similarly, Tom Sawyer, written by Mark Twain in 1876, became classified as one of the first “boy’s books” in the history of children’s literature.

In the 1880s, Robert Louis Stevenson’s Treasure Island, filled with pirates, sea shanties, and treasure maps, helped to bring attention to the adventure genre. The Jungle Book (1894), Rudyard Kipling’s most well-known work, inspired children’s interest in the animals of the jungle, which would transcend the century.

Peter Pan, Little Women, The Wonderful Wizard of Oz, Winnie the Pooh, and many other titles are also products of the Golden Age of children’s literature.

Around the tail end of the Golden Age of children’s literature, writers began to realize there was little transition between books for children and books for adults. At what point should a child graduate to adult books? The answer seemed unclear.

Several writers came along to answer this question. In 1942, the book that is said to have sparked the young adult novel movement, Maureen Daly’s Seventeenth Summer was published. Following a young girl’s final summer before heading off to college, the story centers around the innocence and purity of first love in a time when dating was very different than it is today.

Later on, Laura Ingalls Wilder’s Little House on the Prairie series would come to be regarded as young adult material, despite the series beginning about ten years prior to Daly’s novel. Children, teens, and adults alike were captivated by the stories about the Ingalls family’s quest for survival during American westward expansion.

Young adult literature has had a hard time finding a legitimate place in homes and schools. While the genre has expanded greatly, especially in the last twenty years, the tendency of YA books to highlight more mature topics has earned the genre many spots on banned book lists throughout the history of children’s literature. Despite the challenges it has faced, the YA novel is still on the rise, with many series today being adapted for the big screen. In more recent years, the dystopian novel has arguably become the face of the YA genre with the success of series like The Hunger Games and Divergent.

Where Do We Go From Here?

Today, we see a huge mix in the available children’s and young adult reading materials; from picture books to full-fledged novels, children still very much read and consume all types of books. However, this doesn’t mean that the children’s book is done evolving.

More than ever, there is a push for all children to see themselves represented in books. Books about LGBTQ+ identifying youth are now widely available, both for younger children as well as teens. Children of all races, abilities, and socioeconomic situations can find themselves in the pages of a book, but there is plenty more work to be accomplished in all areas of identity.

A 2018 graphic from the Cooperative Children’s Book Center showed that of all children’s books published that year, about half featured white characters. The runner up, with 27%, is stories about animals. All other racial identities make up the last 23% of published books in 2018. This was a marginal improvement from their second most recent infographic on diversity in children’s literature, which came out in 2015. This is a huge problem that the industry still needs to address.

Children’s literature certainly has more growth to accomplish in the future, and it falls on us to write the kinds of books we want to see in the world. While this article provides a very brief history of children’s literature, we encourage you to research further because this information helps guide the way we write today. And maybe this article will make you look at the books in your collection just a little bit differently now!

What do you have to tell us about the history of children’s literature? Let’s start a conversation! Leave us your thoughts in the comments below.