The Consequences of Teenagers Leading Rebellions in YA Fiction

You remember the overtake of dystopian YA fiction in the late 2010s, don’t you?

Veronica Roth’s heartstopping Divergent trilogy, Suzanne Collin’s controversial and memorable The Hunger Games trilogy, and Lois Lowry’s discombobulating The Giver Quartet are just a few of the examples of YA dystopian fiction novels that rocked the young adult reading scene.

Within these novels, their protagonists are the catalyst for a changing world. The straw that breaks the camel’s back in a world of indifference.

Many of them lead to a reckoning of events that results in a blood-splattered revolution with a teenager at the head of it.

But only a few stories truly depict the consequences that such responsibilities have on teenagers.

What Are the Consequences of Teenagers Leading Rebellions in YA Fiction?

There are many consequences of teenagers leading rebellions in YA fiction. And I’ve decided to highlight four of them. 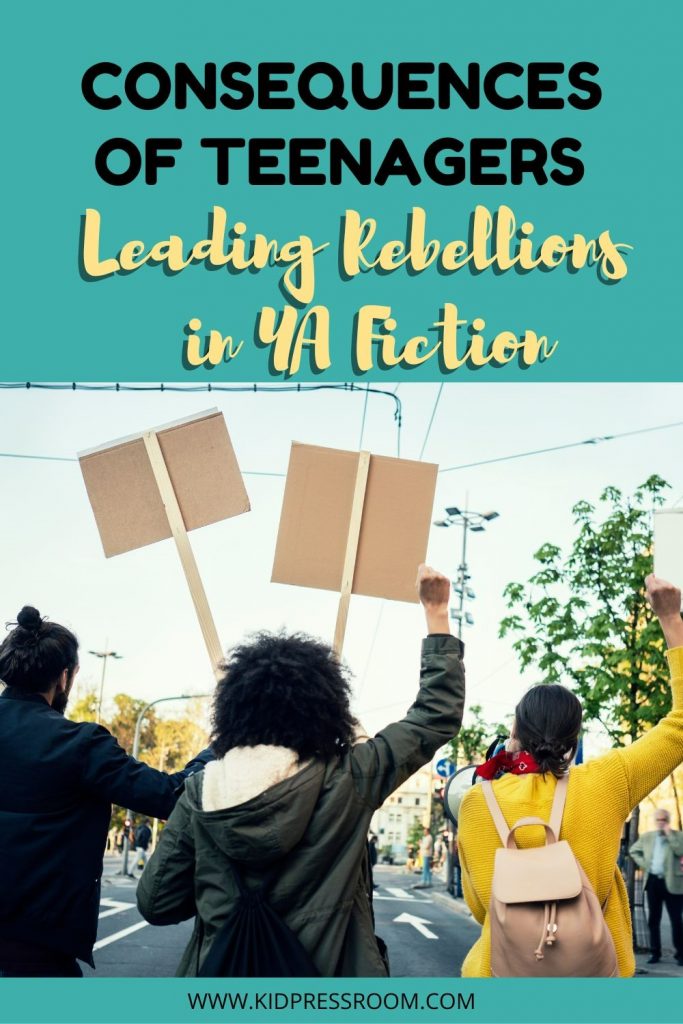 You may also like: Why Renditions of Classic Books Don’t Always Work in YA Literature

Teens Growing Up Too Quickly in YA Fiction

Rebellions require a good sense of responsibility from teens.

However, understanding the issues and complexities associated with dystopian worlds and their solutions also requires a significant amount of responsibility and maturity.

It forces teens to grow up quicker than anticipated without understanding the consequences of a “quickly-maturing teen.”

Many teens who face forced maturity feel left out, and different from the rest of their peers.

Oftentimes, this type of premature growth is a result of multiple variants, such as poverty and absentee parents.

Rebellions only fuel this requirement, as it takes many skills to understand complex aspects of life and work to change them.

Responsibility is supposed to be inherently positive.

From having the responsibility of keeping your room clean to not getting into certain situations, responsibilities are pretty much common among people.

Keeping a rebellion or revolution stable is a common responsibility in YA fiction. But a teen having this responsibility is worrisome because people can only handle so much.

Katniss constantly stresses about Primrose’s well-being. While this responsibility is out of necessity, it does take a toll on Katniss’s welfare.

Throughout history, younger generations have been striving for change in their respective time periods.

It is rather common for some teens to strive for it. But it certainly comes at a cost.

The Hunger Games depicts this cost with its protagonist, Katniss Everdeen.

In the book’s sequel, Katniss suffers from severe PTSD after her time during the Games. Peeta Mellark, her love interest, also shares this condition with her. Along with this issue, the games resulted in him having to get his calf amputated.

Suzanne Collins depicts Katniss and Peeta’s trauma from not only the Hunger Games, but also the effects of the Mockingjay Revolution.

Katniss initially does not want to be the face of the rebellion. Not only does it hurt her family, but it has her fearing for her life consistently in the books.

Throughout the books, Katniss ranges between sixteen and seventeen years old. Although by having much responsibility and maturity, she is a teenager attempting to absorb much of the trauma behind the plot.

In Divergent, Tobias Eaton is the one with the most prominent trauma. The rebellion only amplifies the problem, as he deals with the return of his absentee mother and forced interactions with his abusive father.

These books go to show that teens in YA fiction struggle to handle such significant responsibilities well. Being the face of a world-changing rebellion has certainly its toll on them.

In YA fiction, adults are either prominent figures, morally questionable antagonists, or barely present in dystopian worlds.

Tris’s parents in Divergent defended their daughter to the end, while prominent figures among their communities attempted to harm them.

Katniss’s mother in The Hunger Games did her best with her circumstances, thus resulting in other adults seeing the protagonist as a teenager in need of adult assistance.

But YA dystopian fiction is a result of adults failing the younger generation in the storylines.

They attempt to adjust the world in its current state, only for it to negatively affect future generations.

Even more so, these adults tend to ostracize teens for pointing out the flaws and complexities within the system that they altered.

Adults in YA fiction spaces that use the dystopian trope inadvertently fail their teens without considering their actions– the reason for a rebellion.

Conclusion on the Consequences of Teenagers Leading Rebellions in YA Fiction

Dystopian worlds are filled with many complex issues.

And the fictional teens ruling the rebellions to fight these complexities tend to suffer the consequences one way or another.

Whether it’s PTSD or forced maturity, teens react to the harsh realities of leading rebellions.

The thought of the youth leading us to world-changing revolutions is an interesting idea. Though, we still need to consider the consequences it has on not only teens, but the adults around them who have failed by placing these complexities into the world.

How do you feel about teenagers leading rebellions in YA fiction? Does it have negative consequences? Or are we underestimating what teens can and cannot handle under the pressure of the world?