For this month’s The Illustrator Corner (TIC), we’d like to introduce illustrator, artist, and graphic designer Donna Berger!

An acclaimed and widely recognized children’s book illustrator, Donna’s work has been featured in solo and juried shows and recognized with awards at various museum and gallery locations including the American Labor Museum (Haledon, NJ), Arts League of Lowell, Brush Gallery, Chelmsford Art Society, and more.

According to Donna, art is the thread that weaves together her creative experiences. This began with classes as a child at the Cleveland Museum of Art and Cleveland Institute of Art. She grew into an art major at Bowling Green State and Cameron Universities, and finally took up a professional career as teacher, marketing communication manager, illustrator, graphic designer, and fine artist.

Donna now works at the Chelmsford Center for the Arts, a creative community dedicated to painting, music, dance and other forms of creative expression. There, she loves to work on people, pets, nature, and historical themes, which she chooses to produce in an expressive realistic style. (See below for some examples!)

Donna’s first professional illustrating job was at the Ohio State University, where she worked on updating and re-illustrating education books. For example, her new illustrations featured women and people from different parts of the world working as lawyers and doctors, instead of just men.

She believes that this first job has helped her with her ability to accurately draw children from different cultures, which is something she is often credited with today.

Since her first job, she has worked with many publishers, including Compass Point Books, Rigby Education, Scholastic Education, Steck Vaughn and Zaner-Bloser. 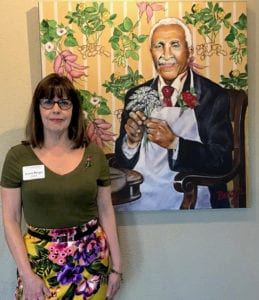 Illustration, according to Donna, is one of the most important aspects of a book.

“I like my illustrations to add special elements that are not mentioned in the text but help the reader to discover more about the characters and their environment. If the illustrator has a personal connection to the story, I feel the illustrations will create a special bond to the reader.”

She is inspired by author and illustrator Chris Van Allsburg because of his unusually-shaped books, illustration textures, and interesting compositions.

Since the turnaround for children’s books requires illustrators to be very fast, Donna uses several different tools to help her reach those deadlines.

She typically creates illustrations of children and people of various ethnic backgrounds, animals, and nature. She uses Adobe Photoshop or Illustrator software with a MacBook Pro computer, and a digitizing tablet and pen. If time permits, she may choose to use traditional media: acrylics, oil, watercolor, and/or pencils.

Here’s a step-by-step process of her work in her own words (Thanks for sharing, Donna!) :

Research: Before creating preliminary sketches, I researched George Washington Carver’s background to gather details of his career to use as graphic components that would contribute to his story. Carver’s life began as a slave. His adopted mother taught him to work in the garden and kitchen to create herbal medicines. She encouraged him to pursue his education and career aspirations which led to him becoming a brilliant scholar, scientist, and inventor, respected by presidents and prestigious entrepreneurs. Having gathered this information, I decided to portray Carver as a distinguished man in a formal seated pose, dressed in his typical suit, tie, boutonniere, and white apron, sitting in a strong wooden chair.

1. Reference images and composition: I gathered image snippets for his face, suit, chair, hands and even had my husband pose wearing a white apron. I composed these graphic elements using Adobe Photoshop and while traveling on a plane, I practiced drawing Carver’s face so I would be very comfortable with his image when I started painting. 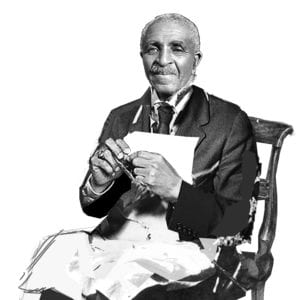 2. Background tones and sketching: After painting an earthy tone over the entire 36” x 36” canvas, I used a soft pencil to roughly sketched the layout before starting to paint to keep the proportions and layout accurate. 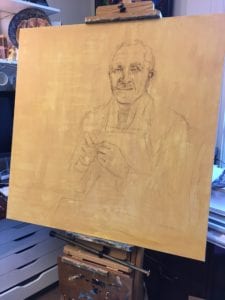 3. Painting: Since color photography was not common during Carver’s life, my reference photos were black and white. In order to get an accurate fleshtones, I referred to a few color images of black men to help me paint his face and hands. I initially used sepia colors to block in the tonal values. 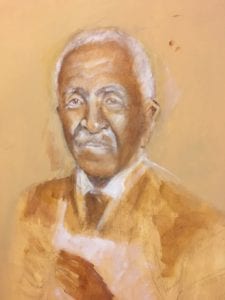 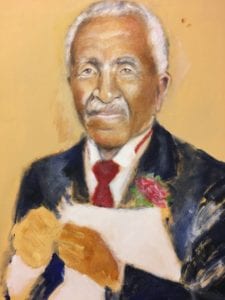 5. I then added detail to the hands and blocked in the wooden chair.

6. I decided to create a wallpaper background to showcase Carver’s use of peanuts, soybeans, and sweet potatoes for crop rotation, important for replenishing the soil with nitrogen and minerals. The first step was to paint white lines. 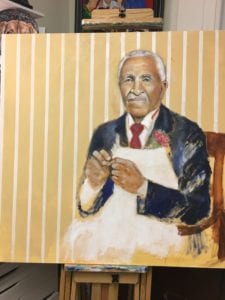 7. Next, I started painting the sweet potato, peanuts, and soybean plants for the wallpaper. 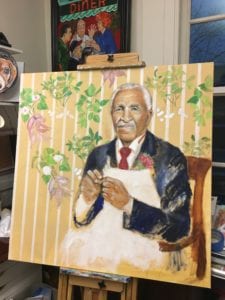 8. I added Carver’s painting palette on a small wooden table because Carver was a skilled artist. Although he enjoyed painting, he decided to focus on is botanical research. 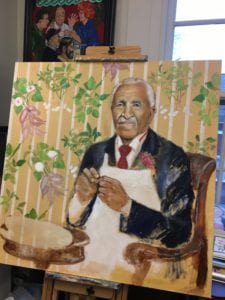 9. Here, I am painting from a print of the plant images created from Photoshop reference image to add details to the wallpaper background. 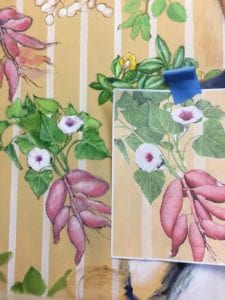 10. Then I added painting details on Carver’s hair and face. 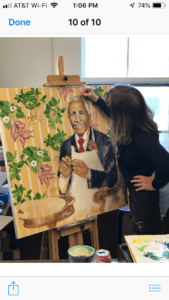 11. I added a painting palette and small table details. 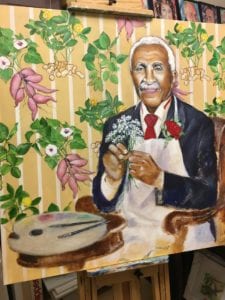 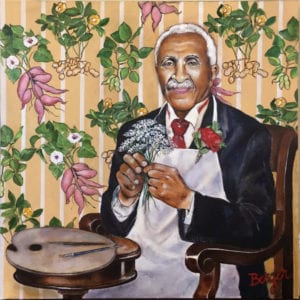 Donna’s next creative challenge is to publish, “The Story of Bluebell,” a story she wrote about a Costa’s hummingbird that lived at Boston’s Franklin Park Zoo. For this story, she plans to merge her children’s book illustration experience with painting and graphic design capabilities.

For more information or to see her other illustrations, visit Donna’s website.

Thanks for checking out this month’s TIC with Donna Berger! Don’t forget to follow Donna’s walk-through on our  Instagram Stories and Highlights. To check out our Illustrator Corner archives or to see other featured illustrators, visit our TIC page.

Kylie loves reading, editing, and writing! Her favorite author is Jane Austen. She just graduated with a Bachelor of Arts in English from Trinity International University this last May. Kylie loves working with kids and dreams to become a children's librarian someday. Reading is one of her favorite things to do, and she loves to share that passion with others!