Books have always been a way to spread awareness of social problems and bring attention to real-life issues. One such issue is an increase in discrimination and racism towards Asian people due to the recent pandemic.

Racism and xenophobia are never okay. Asian people and their cultures are beautiful and should be respected and admired. By reading literature about Asian people, we can bring a healthy representation of other cultures to fellow readers and highlight the importance of listening to Asian voices.

Before we get into the recommendations, it is important to understand that Asian people are not a single uniform group. Asian people come from various unique cultures; they do not all look the same or act the same, and their experiences will not all be the same.

In this article, we will present eight mesmerizing YA books featuring Asian characters and written by Asian authors. 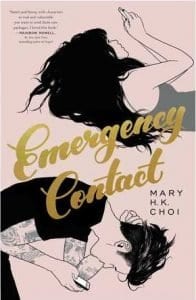 If you asked how Penny Lee was doing, she would answer that she was okay. She was okay; she had an okay life, with okay grades, and an okay boyfriend and okay friends, but now Penny is moving to Austin, Texas for college, and she can’t wait to leave her okay life behind.

Sam feels stuck. Working and sleeping at a cafe, he knows this difficult time in his life will be a motivational story when he’s a famous movie director, but right now it feels like a mountain he is struggling to reach the peak of.

Though Sam and Penny meet in an awkward manner, they swap numbers and become each other’s confidants, sharing deep secrets and fears through text. Emergency Contact is a cute modern-day romance story, featuring an Asian character written by an Asian author, which means the struggles Penny faces are reflections of real-life issues experienced by Asian teens, such as casual racism and feeling like the unimportant friend 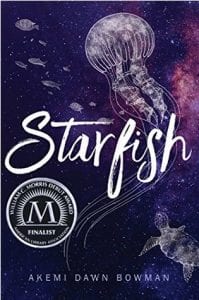 In Starfish, a half-Japanese teen struggles with social anxiety, her narcissistic mother, rejection from art school, and her abusive uncle moving back in with her family. Kiko Himura wanted to escape herself and her problems by getting into art school, but now she’s truly stuck.

Or so she thought. Just as she was losing hope, Kiko embarks on a West Coast journey that frees her from her home life but confronts her with life-changing truths about herself. Akemi Dawn Bowman wrote this story of family and identity to heal readers, just as she was healed. 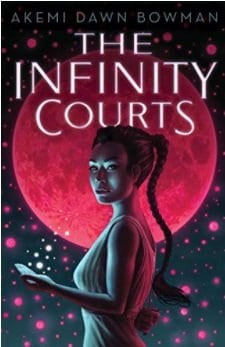 In another novel by award-winning author Akemi Dawn Bowman, eighteen-year-old Nami’s life is just about to begin. She’s a recent high school graduate, on her way to enjoying a party with her classmates and the boy she’s in love with, but she’s murdered before she gets there.

Nami awakes in a place called Infinity, where the human consciousness goes after the body dies. Here she discovers Ophelia, a virtual assistant used on Earth who has taken over the afterlife and plans to destroy human life once and for all. To stop Ophelia, Nami teams up with a group of rebels and must confront herself to uncover the difference between humanity and artificial intelligence.

The Infinity Courts is a novel with Asian representation specific to East Asian characteristics and culture.

You may also like: 8 Fascinating Teen and YA Books featuring Hispanic/Latinx Characters

Forest of a Thousand Lanterns by Julie C. Dao 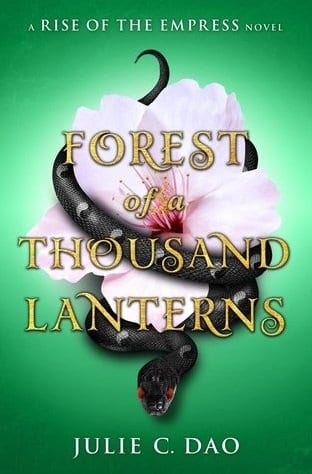 In this East Asian-inspired retelling of the story of the evil queen from Snow White, the stars have proclaimed that Xifeng is meant for magnificence. Xifeng will be the Empress of Feng Lu, but only if she embraces the darkness with her, threatening her future with the love of her life and invoking dark magic through bloody deeds.

Desiring to fulfill the destiny promised to her by her evil aunt and following a wicked mission sent by the power that controls her, Xifeng must determine how much she is willing to pay for greatness.

This novel has East Asian representation and is the debut novel by Vietnamese-American author Julie C. Dao. Forest of a Thousand Lanterns is the first novel in the Rise of the Empress duology, followed by Kingdom of the Blazing Phoenix. 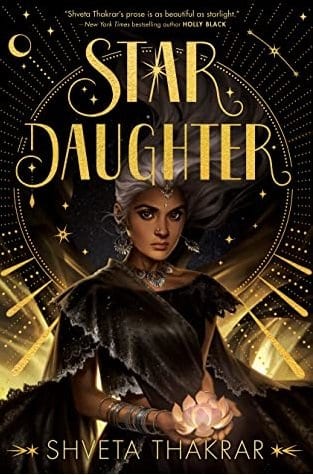 In this novel spilling with Hindu culture, the stars are homes and sometimes speak. Sheetal Mistry is half human—and half star. Sheetal has been hiding since her celestial mother returned to her constellation. But everything explodes when the pull from the stars overwhelms her and starfire burns her human father.

Sheetal’s only option to save her father is to join the stars. She learns that she must represent the stars in a competition that will decide which house will rule the heavens. But Sheetal is not prepared to uncover the dark history of her celestial ancestors, nor is she aware of the powers working to separate the earth and the heavens forever.

Star Daughter has South Asian representation and portrays specific elements of Hindu mythology. This is one of many YA books featuring Asian characters that is set in a realm of fantasy. It is important that all genres cast Asian characters not just in minor roles, but as strong protagonists, in order to develop their characters in a positive light.

The Henna Wars by Adiba Jaigirdar 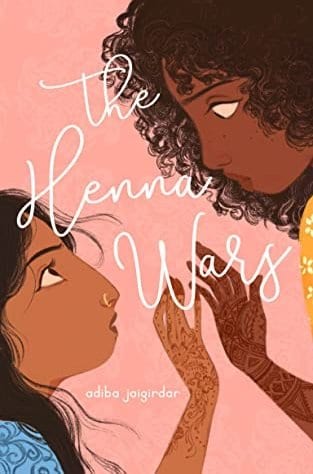 Nishat is Muslim. And lesbian. Yet when she comes out to her parents, they insist that she can’t be both Muslim and lesbian, forcing Nishat to choose between herself and her family.

To complicate matters, Nishat enters a school competition for the best business and ends up in a competition with a childhood friend, Flávia. Both girls have chosen to build a business around henna. Juggling crushes and sabotage, these two girls realize there is more to each other than they first thought.

The Henna Wars is written from an authentic Bengali-Irish perspective, and it discusses topics such as cultural appropriation and religion.

Not Your Sidekick by C.B. Lee 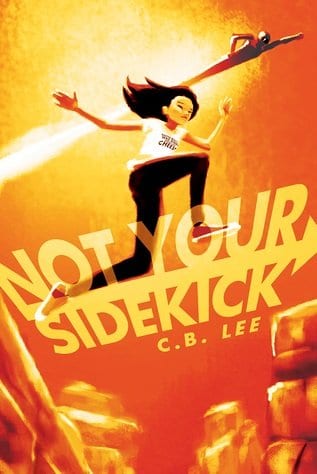 In Andover, everyone has superpowers. Everyone, that is, except Jessica Tran. Without superpowers, Jessica is just looking for a way to make her college applications stand out.

Luckily, she finds the perfect paid internship! But everyone she works with seems to have secrets, from her longtime crush to another mysterious intern. The internship goes from fun to dangerous when Jessica discovers a plot bigger than her world of heroes and villains.

Not Your Sidekick has Chinese-Vietnamese representation, as well as a bisexual main character. YA books featuring Asian characters such as Jessica can contribute to breaking down stereotypes surrounding Asian people.

Sirscha Ashwyn knew that if she trained hard enough, she could achieve her goal of becoming the queen’s royal spy. What she didn’t know is that she has the ability to restore life to a dead soul. The soul in question belongs to her best friend, Saengo, who was killed by shamans. Sirscha is revealed to be a soulguide, the first in years uncounted.

She is summoned by the Spider King, whose power over the Dead Wood is waning. But the Dead Wood is no ordinary forest. Its trees are possessed by souls. Most importantly, the forest is key to maintaining peace between kingdoms. Only a soulguide can tame the forest. Now Sirscha must learn how to control her powers before the forest destroys the peace, or keeps Saengo’s soul forever.

Forest of Souls has specific elements of Hmong culture. The Hmong people are an ethnic group from the mountain regions of Asia and are a subgroup of the Miao ethnicity in China.

Last Night at the Telegraph Club by Malinda Lo 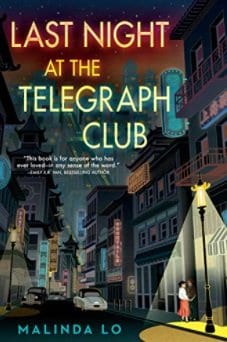 The Telegraph Club, a lesbian bar, is the one place Lily Hu and Kathleen Miller can be together. Outside, they face threats of all kinds in 1950s America. Yet the two girls will face any and all threats in order to be together.

As an Asian-American, the main character faces struggles such as deportation and Red-Scare paranoia in this historical novel set in San Francisco’s Chinatown. Last Night at The Telegraph Club has received several acclaimed reviews.

Finding YA books featuring Asian characters might be difficult, but it’s not impossible. Look for Asian authors to support them and give them a powerful voice that will benefit the Asian community.

Reading Asian books is not the only way to combat racism. If you consume Asian media, remember to show your support by staying away from harmful xenophobic trends, such as the damaging fox eye trend. You can also support Asian-owned businesses.

If you are a librarian or teacher, these eight books plus the bonus are perfect to educate teens outside the Asian community on the struggles Asian people face. If you are an Asian reader, I hope you find comfort and joy in these books.

These titles along with more book goodness are available in the Bookshop.

What are your favorite YA books featuring Asian characters? Share your own top list in the comments below.