Romantic literature has come a long way from the likes of Emily Bronte and Jane Austen.

In the same breath, young adult literature has evolved from dystopian worlds and twisted fairytales–as we follow the influence of classics on contemporary YA books–to tackling difficult situations in real-world scenarios with flawed, human characters.

In the place of traditional young adult fiction, chick literature has taken its place as young adults grow into new adults.

However, the transition from young adult to the current new adult literature garners the question of why young adults gravitate towards chick literature. Before getting into the thick of the investigation, everyone must be wondering just what is ‘chick lit’ and what defines books as such.

What is ‘Chick Lit’?

‘Chick Lit’ or chick literature, is a subcategory of young adult and new adult novels that cater towards a majority female audience with its themes, characters, and situations that people with such experiences could relate to.

In some instances, chick literature details the positive outcomes of realistic situations for the sake of escapism and a preferable ending. Popular examples of Chick Lit include Sally Thorne’s The Hating Game, Jasmine Guillory’s The Wedding Date, and Jojo Moyes’s Me Before You, among other similar titles.

These listed books are synonymous for adhering to the typical Chick Lit tropes, including quirky main characters of a shorter stature, physically or characteristically juxtaposed male love interests, and a plot surrounding occupational struggles intertwined with the progression of their relationship with the male love interest.

Why Do Young Adults Gravitate Towards Chick Lit?

Young adults gravitate towards Chick Lit for several reasons. Here are a few of them: 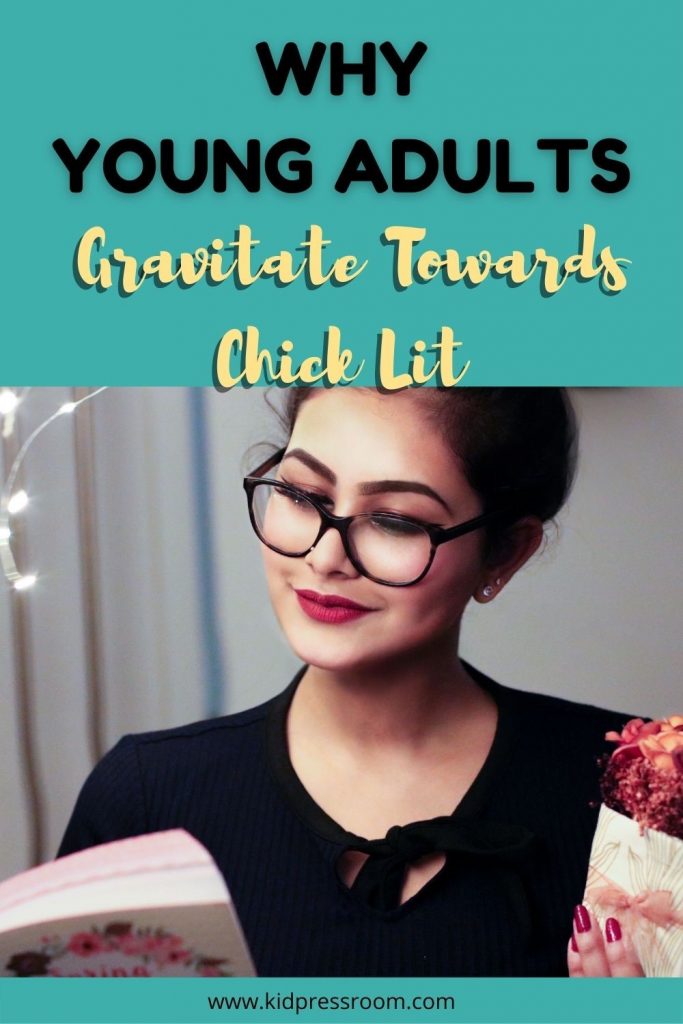 You may also like: Why Are There So Many YA Trilogies?

Its relatability is out of this world

Adults, especially young adults, gravitate towards entertainment that relates to them. It’s why television shows like Friends and The Office are so popular among that demographic and younger. Hanging out with one’s friends and wanting to disregard the unpleasantries that come with work can be relatable for some new adults as they navigate life.

Literature works in the same way, in which people strive to escape through people and worlds they relate to. One prime example of this is Lucy Hutton’s personality and quirks from The Hating Game. Lucy is like many protagonists in Chick Lit novels. She has her quirks, such as collecting rare Smurf figurines, having a messy apartment, and eating junk food to an unhealthy degree. She’s overworked, tight on bills, and shows great disdain for her co-worker.

For many adults, these are familiar qualities that are synonymous with their own lives. Seeing this in a novel validates the worries and ideas of what adulthood looks like. Some may even seek solace in knowing they aren’t alone in being far from the norms of adulthood.

Another example of this is Jojo Moyes’s quirky protagonist Louisa Clark from the bestselling novel, Me Before You. She is a young adult seeking employment after a subsequent laying off while residing with her family.

Louisa is someone who exudes childish behavior throughout the novel, especially after meeting her future love interest once she seeks employment. She’s bright and cheerful, tends to wear brightly-colored leggings and outfits, which seems questionable to other adults around her. Regardless of this, Louisa exhibits her behaviors and characteristics proudly. Even in times of distress, she tends to keep a positive mindset and still exudes adult behaviors through her childish antics throughout the book.

Young adults can relate to Louisa’s character because she prefers hobbies and dress wear associated with children, lives with her family still, and is actively seeking employment. Many new adults are enduring these things in real life, in terms of living with their parents and enjoying childish endeavors well into their twenties and thirties.

Louisa is relatable, and her personal issues and reasons for her childish behavior turn her into more than a character in a romance novel. It makes her human and flawed, which makes her character that much more lovable and appreciated.

Characters in Chick Lit are reflections of people in real life, and when young adults can find themselves in characters similar to them, it makes the chick literature genre an easier and fun read.

While Chick Lit novels center themselves in worlds similar to the modern, mundane world, there is a hint of fantasy for the sake of escapism. Chick Lit novels tend to glamorize adulthood in a manner that does not fit the traditional standard of glamorization.

As humans, we tend to glamorize and romanticize situations and scenarios we would like to be part of. Chick literature adheres to this human nature because many of the aforementioned books include extreme versions of scenarios where the protagonist is in a troubling situation and comes out of it relatively unscathed and finding success and solace in their endings.

This is because being successful is an important part of some young and new adults’ worlds. Being able to say that money is not an issue is also something that new and young adults strive to achieve, if their lifestyle has not instilled this mindset in them yet.

As young and new adults, it is difficult for some to say that money is not an issue. With glamorizing adulthood through chick lit, employing protagonists with moderate to high-paying jobs to center the discussion on enjoying adulthood and its simplistic qualities is the standard. Even with a moderate-paying job, authors rarely mention money problems unless it pertains to the plot, like Me Before You.

Chick Lit glamorizes the fun side of adulthood, mixed in with the dramatic scenarios that young adults see in films. Not to mention, many love interests tend to come from families with money.

When the protagonists begin pursuing a romantic relationship with their love interest, money tends to be something they notice throughout the relationship’s progression. Some young and new adults would rather not want to read about money struggles, especially if it hits too close to their personal issues.

Chick Lit would not be what it is without the most important part of its tropes: romance. Nearly everyone loves a bit of romance, even in other genres. This generation is one of the loneliest generations and due to this, romantic literature with a twist is something they gravitate towards.

Many other tropes go along with Chick Lit, such as enemies to lovers, fake dating, friends to lovers, and mutual pining, among other romantic cliches, making the genre itself more enjoyable.

These are popular among many novels, but especially that of chick literature. With this in mind, young and new adults eat up these cliches and seek more similar to them. As a result, the demand for Chick Lit books remains high among young and new adults.

Romance sells, along with its subtopics, and the demographic is acutely aware of this fact.

Conclusion on Why Young Adults Gravitate Towards Chick Lit

So, why do young adults gravitate towards Chick Lit?

Because it glamorizes a lifestyle they are struggling to understand. Along with this, the subgenre makes young and new adults comfortable with the place they are in life.

While some young adults are in positions that they expect, others are experiencing the opposite. Chick Lit contains characters that adhere to people who struggle to understand adulthood and engage in unconventional hobbies that other adults would see as childish and questionable.

In other words, for the struggling young adults (the specific demographic Chick Lit targets), these novels allow them to see that their issues are not unlike others.

Do you enjoy reading Chick Lit? Why do you think young adults gravitate towards Chick Lit? Let us know your thoughts in the comments below.